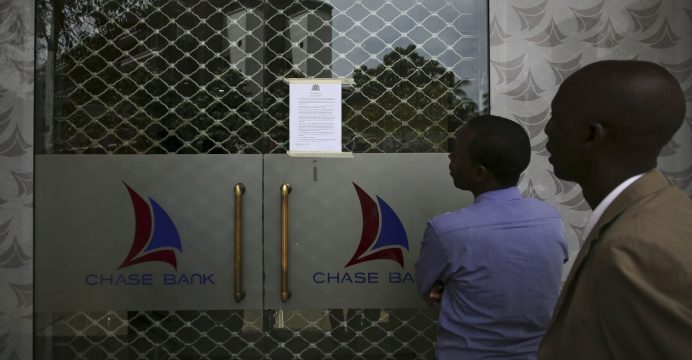 Kenya to investigate 10 banks on suspicion of handling stolen funds

Kenyan authorities will investigate 10 financial institutions suspected of handling funds that were stolen from the government’s National Youth Service (NYS), the director of criminal investigations confirmed on Thursday.

The Daily Nation named nine commercial banks and a financial co-operative society as the institutions that police and the central bank are investigating.

George Kinoti, the director of criminal investigations, told Reuters the list published by the newspaper was accurate.

Activists march past a member of the National Youth Service (NYS) during a protest against corruption in Nairobi, Kenya, May 31, 2018. REUTERS/Baz Ratner
“They will be investigated,” he said, without giving more details.

Dozens of senior officials and business people were taken into custody on Monday and face charges related to the theft of nearly $100 million from the youth agency.

Lamin Manjang, the chief executive of Standard Chartered Kenya, confirmed that the company was under investigation by “authorized government agencies”.

In a statement, KCB said: “This issue is under inquiry by legally mandated investigating authorities and is a subject matter of a court case.”

“At Barclays Bank of Kenya, we take governance very seriously and to that end, we always co-operate fully with any investigating agencies as called upon,” the company told Reuters in an emailed response.

The other seven institutions were not immediately available to comment.

On Tuesday, central bank governor Patrick Njoroge said an unspecified number of lenders were under investigation, with the first phase focusing on tracing the recipients of the funds from the NYS and the recovery of the assets.

President Uhuru Kenyatta pledged to stamp out graft when he was first elected in 2013, but critics say he has been slow to pursue top officials. No high profile convictions have occurred since he took office.

On Thursday, about 200 protesters marched through the streets of the capital Nairobi to protest against what they said was “high levels of corruption”.

“If you look at our roads, our hospitals, job opportunities, they’ve all been neglected because of corruption and if we continue with this trend, most likely in the next five years we will not have a country,” Nichodemus Kimiti, one of the protesters, said.