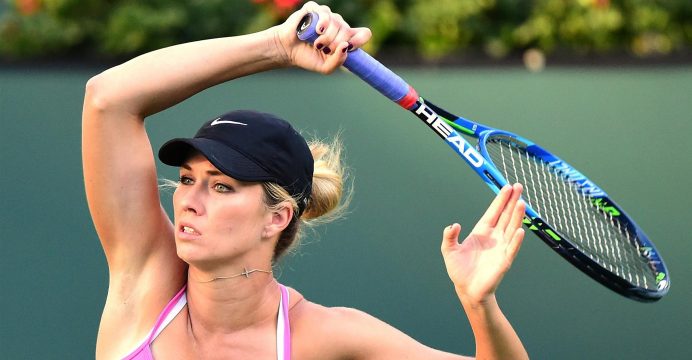 Danielle Collins produced the performance of a lifetime and pulled off an almighty shock at the WTA Miami Open on Wednesday,

sending Venus Williams crashing out 6-2, 6-3 to reach the semi-finals.

It was an amazing effort from a 24 year-old qualifier in just her second season as a professional and her debut appearance at Key Biscayne.

This was the first time in two attempts Collins has beaten a top 10 player, and even the crestfallen world number eight Williams would find it impossible to admit Collins didn’t deserve to seal a meeting with French Open champion Jelena Ostapenko on Thursday for a place in Saturday’s final.

“I don’t think it was my best night of tennis, but there wasn’t a shot she couldn’t make,” Williams said. “She played very well and aggressively, and she went for every shot and it landed.”

Collins was simply delighted with the win over a player she idolized.

“The first time I saw Venus in the locker room I nearly cried,” Collins said. “She

has been my favourite player so I am finding it difficult to wrap my head around this.”

The previously unheralded Collins, a Florida native who ended 2017 ranked 167TH but came into this tournament as the 93rd best player in the world, is certainly having a March to remember.

As a wildcard she reached the round of 16 in Indian Wells and has gone far better here with a fantastic run to the last four having come through qualifying.

That eclipsed the previous best result by a qualifier, when Marion Bartoli made the last eight in 2003.

Despite playing six matches to Williams’ three, Collins came into this encounter having spent 24 minutes less on court than her American opponent (6 hours 58 minutes for Collins and 7 hours 22 for Williams).]

There could, however, be no sterner test for the 24 year-old than veteran Williams,

who had fought her own battles to reach this stage, saving three match points in a marathon three-setter against Kiki Bertens in the round of 32.

Collins could be excused for being nervous, yet the media studies graduate from the University of Virginia,who claimed two NCAA collegiate singles titles in three seasons, roared out of the blocks and grabbed an early break to ease into a 3-0 lead.

Williams was on the back foot and saved two break points at 1-4 to keep herself in the set.

But Collins was relentless. Her hitting, especially from the back of the court, was of the highest order and when she broke again, this time thanks to a brilliant lob, the first set was sealed.

An excitable crowd here were expecting seven-time grand slam winner Williams to respond immediately, but it was her seemingly pressure-free opponent who continued to attack and soon enough, Williams was broken once more.

When the 37-year-old’s serve let her down again, Collins could see the finish line.

Williams was desperately trying to claw her way back in but it was to be Collins’ moment.