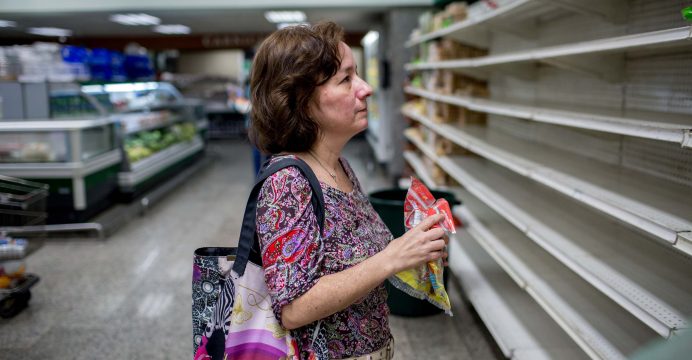 For poor Venezuelans, a box of food may sway vote for Maduro

A bag of rice on a hungry family’s kitchen table could be the key to Nicolas Maduro retaining the support of poor Venezuelans in May’s presidential election.

For millions of Venezuelans suffering an unprecedented economic crisis, a monthly handout of a box of heavily-subsidized basic food supplies by Maduro’s unpopular government has offered a tenuous lifeline in their once-prosperous OPEC nation.

The 55-year-old successor to Hugo Chavez introduced the so-called CLAP boxes in 2016 in a signature policy of his rule, continuing the socialist government’s strategy of seeking public support with cash bonuses and other giveaways.

Now, running for re-election on May 20, Maduro says the CLAPs are his“most powerful weapon” to combat an“economic war” being waged by Washington, which brands him a“dictator” and has imposed sanctions.

Mariana, a single mother who lives in the poor hillside neighborhood of Petare in the capital Caracas, says the handouts will decide her vote

“I and other women I know are going to vote for Maduro because he’s promising to keep giving CLAPs, which at least help fix some problems,” said the 30-year-old cook, who asked not to give her surname for fear of losing the benefit.

“When you earn minimum wage, which doesn’t cover exorbitant prices, the box helps.”

Maduro’s rule since 2013 has coincided with a deep recession caused by a plunge in global oil prices and failed state-led economic policies.

Yet the worse the economy gets, the more dependent some poor Venezuelans become on the state.

Life in the South American country’s poor‘barrios’ revolves around the CLAP boxes. According to the government, six million families receive the benefit, from a population of around 30 million people.

Venezuelans, many of whom are undernourished, anxiously wait for their monthly delivery, and a thriving black market has sprung up to sell CLAP products.

The government sources almost all the CLAP goods from abroad, especially from Mexico, since Venezuela’s food production has shriveled and currency controls restrict private imports.

Critics, including Maduro’s main challenger for the May 20 vote, Henri Falcon, say the CLAPs are a cynical form of political patronage and are rife with corruption.

Erratic supply and control of distribution by government-affiliated groups have sown resentment among others.

“I can’t count on it. Sometimes it comes, sometimes not,” said Viviana Colmenares, 24, an unemployed mother of six struggling to get by in Petare.