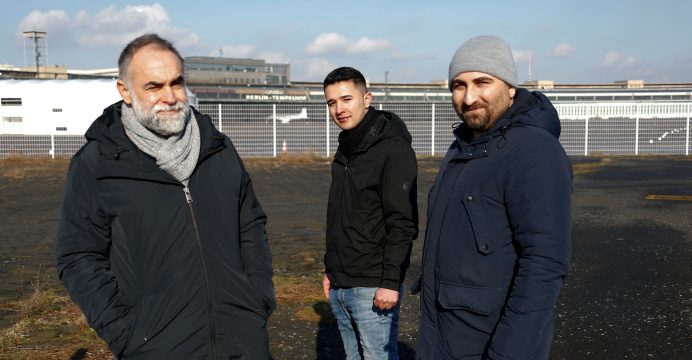 In 2015, with Germany facing turmoil after flinging its doors open to a million refugees, Berlin repurposed a defunct airport to house them, creating an ad hoc village that is the setting for a film to premier at the Berlinale film festival.

Built by forced labor on the orders of Adolf Hitler’s architect Albert Speer, Tempelhof Airport is a mirror of its city’s history, serving as West Berlin’s lifeline during the 1948 Soviet blockade.

The airport was closed in 2008 and its runways were turned into a garden the size of New York’s Central Park for a now united city.

Its hangars, the setting for the documentary “Central Airport THF”, in 2015 became an emergency shelter for more than two thousand of the million-odd people who came to Germany, fleeing war and persecution in the Middle East and Africa.

The film, by Brazilian director Karim Ainouz, documents the life of the airport’s new residents, drawing a parallel the lives of Berliners in the vast adjacent park, contrasting refugees with hipsters on kite skates, joggers and picnicking families.

“There was a contrast there that I thought was really important to document,” said Ainouz, who said he wanted to show the lives of refugees through a more personal lens than was then common.

Ibrahim Al Hussein, a Syrian from Aleppo, had just turned 18 when he arrived at the airport and had to live in the hastily built shelter for more than a year where Ainouz met him.