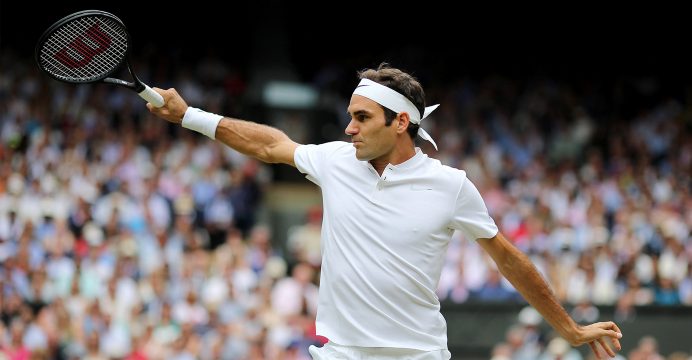 Defending champion Roger Federer moved smoothly into his majestic stride with a straight-sets win over Slovenian Aljaz Bedene in his opening match at the Australian Open on Tuesday.

The 36-year-old Swiss turned the evening clash on packed Rod Laver Arena into an exhibition as he struck 41 winners to breeze past a willing but outclassed Bedene 6-3 6-4 6-3.

The only time Federer looked remotely stumped came during a post-match interview conducted by American comedian Will Ferrell who told him he had played like a “silky gazelle”.

“Don’t they get eaten in the end?,” Federer ventured before being asked whether he was a witch or a vampire and whether his age-defying performances were down to a diet of wombat meat.

“I was a bit scared,” Federer joked. “I‘m happy I dodged some questions there.”

While Ferrell provided some unexpected comedy, Federer again proved that when it comes to tennis he is king of the jungle.

Any player hoping to stop him retaining his title and claiming a 20th grand slam will have to be pretty special on this evidence.

Federer looked just as imperious as when he won the last five games to beat Rafa Nadal in last year’s thrilling final and end a five-year wait for his 18th major.

Poor Bedene, no mean performer at world number 51, can now at least say he has witnessed Federer’s brilliance first hand, having never previously faced him.

He played his part in entertaining exchanges but Federer, sporting a diagonal pink stripe on his immaculate white kit, was in one of those moods when he could strike winners at will.

He broke Bedene’s serve in the fourth game of the first set in which he conceded only three points on his serve.

Federer pounced immediately at the start of the second, producing a fizzing backhand return before leaping high to smash away Bedene’s defensive lob.