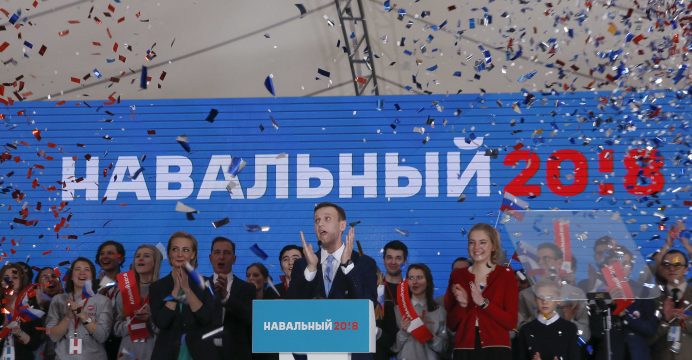 Russian opposition leader Alexei Navalny cleared the first hurdle on Sunday toward taking part in next year’s presidential election, even though the central election commission has previously ruled him ineligible to run

Navalny, 41, is a fierce opponent of President Vladimir Putin, who is widely expected to win re-election in March, extending his 17 years in power.

On Sunday Navalny, a veteran campaigner against corruption among Russia’s elite, won the initial support of 742 people at a gathering in a district of Moscow, above the minimum 500 required to initiate a presidential bid.

“There is no large-scale support for Putin and his rule in this country,” Navalny told the gathering, describing himself as a “real candidate” for the election and threatening a boycott of the vote by his supporters if he is barred from running.

But Navalny now needs to be officially registered as a candidate by Russia’s central election commission, which has previously said he is ineligible due to a suspended prison sentence that he says was politically motivated.

Navalny has been jailed three times this year on charges of repeatedly organizing public meetings and rallies in violation of existing laws. He says the Kremlin is deliberately trying to thwart his political ambitions.

The European Court of Human Rights ruled in October that Navalny’s conviction for fraud in 2014 was “arbitrary” and ordered Moscow to pay him compensation.

On Saturday Russia’s ruling party United Russia pledged “all possible support” to the 65-year-old Putin in his bid to win a further six years in power in the March election.

On Sunday Russian property developer Sergei Polonsky, who has been convicted of defrauding investors, also secured enough initial backing to seek clearance from the election commission to take part in the presidential race.

Others planning to run include television personality Ksenia Sobchak, whose late father was Putin’s boss in the early 1990s, journalist Ekaterina Gordon.