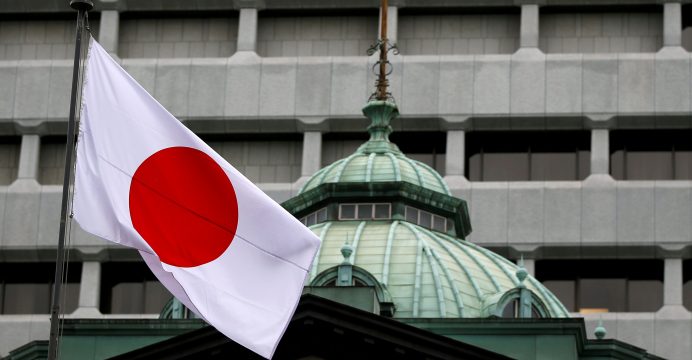 Japan exports boom, but inflation not following script in blow to Bank of Japan exit plan

Japanese exports accelerated sharply in November, yet again pointing to growing momentum in the world’s third-biggest economy. There was just one catch: inflation remained stubbornly low and well off the central bank’s 2 percent target.

The combination of steady growth and benign consumer prices mean the Bank of Japan will lag other major central banks in exiting crisis-era monetary stimulus, with analysts widely expecting BOJ Governor Haruhiko Kuroda to keep the liquidity tap wide open at a meeting later this week.

Indeed, a BOJ survey on Monday showed companies’ inflation expectations heightened only a touch in December from three months ago, despite a tight labor market and business confidence at over a decade high.

The persistently low inflation – with core prices running at an annual pace of 0.8 percent – was also hard to square off with the robust performance of Japan Inc., which has benefited from booming exports thanks to upbeat global demand.

Separate data from the Ministry of Finance showed exports grew 16.2 percent in the year to November, beating a 14.6 percent gain expected by economists in a Reuters poll and accelerating from the prior month’s 14.0 percent increase, led by a stellar sales to China and Asia.

“The global economic outlook by IMF and OECD suggests the world economy will remain resilient for the time being, which will provide favourable export conditions,” said Takeshi Minami, chief economist at Norinchukin Research Institute.

All of this has helped Japan’s economy score its second-longest run of postwar growth. That marked a feather in the cap of Prime Minister Shinzo Abe whose ‘Abenomics’ stimulus policies have put the nation on the cusp of vanquishing nearly two decades of deflation.