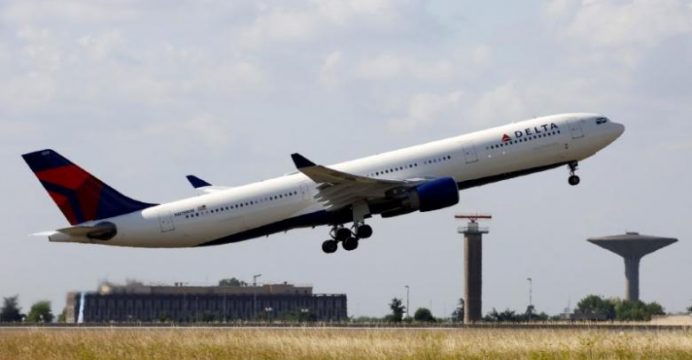 Airbus deliveries to Delta will begin in 2020 and go through 2023 under the order, worth an estimated $12.7 billion based on the aircraft catalog price.

Delta Air Lines announced on Thursday that it has ordered 100 Airbus planes with an option to buy 100 more, in a blow to Airbus’ American rival Boeing.

Delta said it was buying the A321neo aircraft to renew its narrow-body fleet, which has 197 seats and are used for domestic or short international flights, reports BSS.

The Airbus order comes amid public friction between Delta and US giant Boeing over a trade dispute involving a separate Delta deal to buy planes from Canadian company Bombardier.

Airbus deliveries to Delta will begin in 2020 and go through 2023 under the order, worth an estimated $12.7 billion based on the aircraft catalog price.

Delta said in an investor presentation that the new planes would result in 40 percent fuel savings compared with the jet they are replacing.

“This is the right transaction at the right time for our customers, our employees and our shareholders,” Delta CEO Ed Bastian said in a statement.

Airbus in 2015 opened a manufacturing plant in Mobile, Alabama to build single-aisle planes with an eye towards competing more aggressively in the US market.

Toulouse, France-based Airbus highlighted its growing connection to the US in the announcement, saying most of the new planes would be delivered from Mobile.

“This purchase furthers our commitment to US aviation — a commitment that has never been stronger,” said John Leahy, chief operating officer for customers at Airbus Commercial Aircraft.

“Today, there is more US content in Airbus aircraft than from any other country, with more than 40 percent of our aircraft-related procurement coming from the United States.”

Delta also announced that it picked United Technologies’ Pratt & Whitney as the engine provider, and for engine maintenance. Delta also selected Pratt engines for the Bombardier order, which is at the heart of the Boeing trade dispute,

Boeing has argued Delta’s planes were underpriced due to illegal Canadian government subsidies to Bombardier.

“Delta remains a valued customer, and we’ll continue exploring ways to best meet their needs in the future,” a Boeing spokesman said.

“We competed with a strong but disciplined offer in the Delta campaign. While Delta has chosen to go with Airbus and Bombardier in recent single aisle campaigns, we are proud of the 737 MAX family’s superior value and performance.”

Canada-based Bombardier in October unveiled a production alliance with Airbus that granted the European company a stake in the Bombardier C-Series program. Delta has said it will not pay for any punitive tariffs sought by the US government in response to Boeing complaints.

Boeing’s actions in the trade dispute has done “significant has done significant damage to its relationship with Delta for sure,” said Jim Corridore, an analyst at CFRA Research.

“Obviously today’s news is a direct blowback to Boeing’s protectionist stance in getting the US government to add those taxes to the Bombardier jets.”

Corridore noted that Boeing also lost a major deal with the Canadian government, which dropped a deal to buy F-18 fighters from the US company following the trade dispute.

Boeing’s stance “makes no sense” and has “cost them two major deals,” he said, adding that Boeing’s outlook is otherwise bright because of strong demand in both commercial airplane and defense businesses.