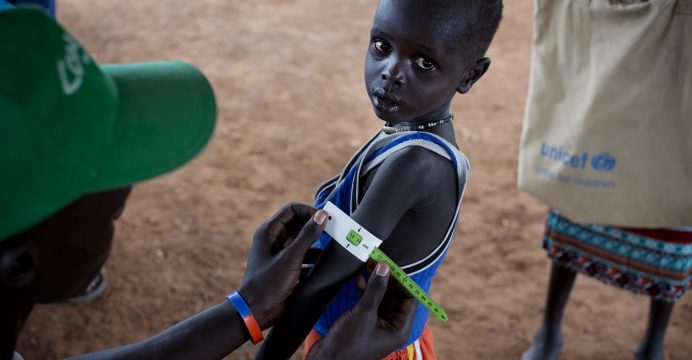 South Sudan needs $1.7 billion in aid next year to help 6 million people — half of its population — cope with the effects of war, hunger and economic decline, the government and the United Nations announced on Wednesday.

South Sudan slid into civil war in late 2013, two years after gaining independence from Sudan and a third of its 12 million population has fled their homes.

The conflict was sparked by a feud between President Salva Kiir and his former deputy Riek Machar, who is being held in South Africa, and eventually led to a fight along ethnic lines.

”We are calling for $1.72 billion to continue providing life-saving assistance and protection for 6 million people most in need in South Sudan,” Alain Noudehou, the U.N. Humanitarian Coordinator for South Sudan, told a news conference.

Since the conflict began, about 4 million people have been forced to flee their homes, with nearly 1.9 million people who have internally displaced and about 2.1 million who have fled to neighboring countries, he said.

The conflict has also led to a cut in crude oil production, which is a key foreign exchange earner, and the ensuing insecurity has hampered cultivation of food.