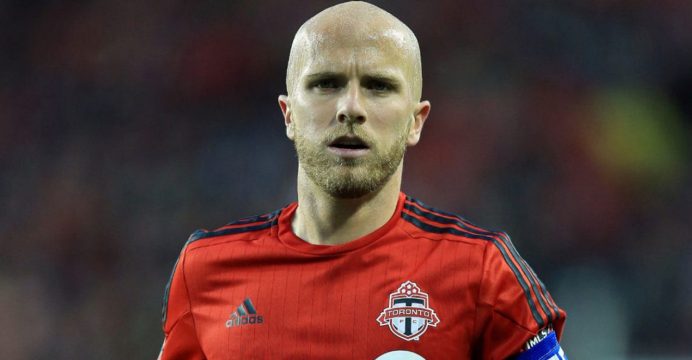 Toronto ready to learn from past, says Bradley

Toronto FC captain Michael Bradley believes his team have absorbed the lessons of past disappointments as they prepare for their playoff showdown with Columbus Crew on Tuesday.

The Canadian side finished with the best record in Major League Soccer this season and are favourites to advance to the championship game from their two-leg Eastern Conference final with Crew.

Toronto FC have suffered consecutive years of disappointments in the playoffs, losing the MLS Cup final last season on penalties to the Seattle Sounders in front of their home fans.

That shattering loss came 12 months after they were eliminated in the playoffs by Canadian rivals Montreal Impact.

Bradley, however, said the surviving members of those defeats had been brought closer together as they prepare for their latest shot at the title.

“You don’t know what the toughest days are like if you haven’t lived them,” Bradley told reporters ahead of Tuesday’s first leg in Ohio.

“And we have a group that has lived a lot of those days together. We continue to use all the experiences along the way to make sure they help us grow, help us improve.

“And I like where we are right now. We’re in a really good spot. We’ve had a great year, everyone feels really good about things — but the biggest games are still to come.”

Toronto head into the game with two key members of their team — Sebastian Giovinco and Jozy Altidore — missing through suspension.

Giovinco and Altidore contributed 31 goals between them this season, and their absence deprives Toronto of their main attacking outlets.

But Bradley said the absence of Giovinco and Altidore would not affect Toronto’s approach to the game. “We’re going for it,” he said.

“We’ll be aggressive, try to put the game on our terms regardless of who we have playing.”

The second leg of the encounter takes place on November 29 in Toronto.

Columbus, meanwhile, are determined to maintain their fairytale postseason run — after weeks of turmoil following revelations that the team’s ownership is considering relocating the franchise.

Crew also have a recent history of agonising near-misses in the MLS postseason, having lost the 2015 MLS Cup final to Portland in 2015 at their home ground.

So far Columbus have defied the odds and overcome higher-seeded opponents to make it to the Conference championship, beating fourth seeded Atlanta before eliminating New York City FC.

“We’ve had this (underdog) title for a while now,” Mensah said. “We have to go out and there and show what we can do and get the result and move onto the next round.

“We’ve come a long way. There’s no time to relax.”