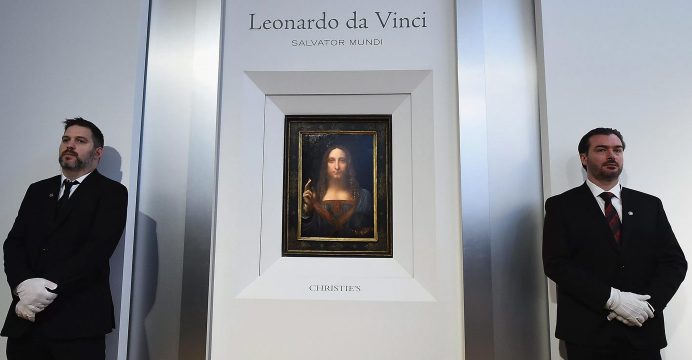 What is the only Da Vinci painting on the open market worth? A Russian billionaire believes he was swindled when he bought it for $127.5 million. This week he’ll find out if he was right.

“Salvator Mundi,” a painting of Jesus Christ by the Renaissance polymath Leonardo da Vinci circa 1500, is the star lot in New York’s November art auctions that will see Christie’s and Sotheby’s chase combined art sales of more than $1 billion.

It goes under the hammer at Christie’s on Wednesday, something of an incongruous lot in the post-war and contemporary evening sale, which attracts the biggest spenders in the high-octane world of international billionaire art collectors.

The auction house, which declines to comment on the controversy and identifies the seller only as a European collector, has valued it at $100 million. “Look at the painting, it is an extraordinary work of art,” said Francois de Poortere, head of the old master’s department at Christie’s. “That’s what we should focus on.”

But the price will be closely watched — not just as one of fewer than 20 paintings by Da Vinci’s hand accepted to exist, but by its owner Dmitry Rybolovlev, the boss of soccer club AS Monaco who is suing Swiss art dealer Yves Bouvier in the city-state.

Rybolovlev accuses Bouvier of conning him out of hundreds of million dollars in parting with an eye-watering $2.1 billion on 37 masterpieces. One of those works was “Salvator Mundi” which has been exhibited at The National Gallery in London.

The painting’s rarity is difficult to overstate. For years it was presumed to have been destroyed. In 1958, it fetched 45 pounds ($60 in today’s money) and disappeared again for decades, emerging only in 2005 when it was purchased from a US estate.

It was long believed to have been a copy, before eventually being certified as authentic. All ll other known paintings by Da Vinci are held in museum or institutional collections.

“For auction specialists, this is pretty much the Holy Grail,” Loic Gouzer, co-chairman of Christie’s Americas post-war and contemporary art department, has said. “It doesn’t really get better than that.”