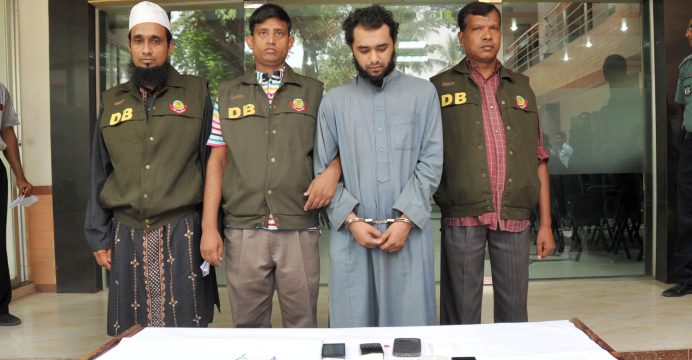 Samiun complained that five guards stripped him naked and touched his genitals while laughing.

A British citizen of Bangladeshi origin, who was arrested in Dhaka in September 2014 on charges of recruiting for the Islamic State and imprisoned, surfaced in India when Indian police arrested him in Delhi in September 2017.

Samiun Rahman, the 31-year-old IS recruiter, now remains imprisoned in New Delhi’s dreaded Tihar Central Jail. He was arrested on charges of radicalising Rohingyas to fight the Myanmar government.

The Indo-Asian News Service reports that Saimun filed a written complaint to the court that he was “sexually harassed” by prison guards.

In an application moved by his lawyer MS Khan, Samiun wrote that on November 2, five guards stripped him naked and touched his genitals while laughing.

In addition, Samiun complained that his prison cell lacked the basic facilities and he was not provided with food, water or medicine properly.

The Bangla Tribune quotes MS Khan saying an official with the British High Commissioner was not allowed to visit Samiun in jail.

The court has asked the prison authorities to present the accused guards before the court on November 8 to respond to the allegations.

Bangladesh Police were left baffled as to how a British militant recruiter arrested in Dhaka three years ago was able to leave Bangladesh in spite of his passport being confiscated by the authorities.