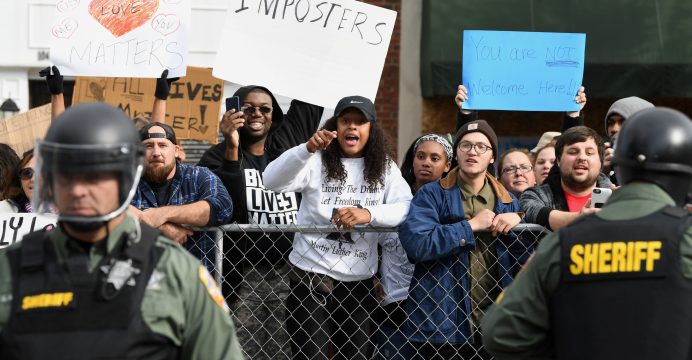 About 300 white nationalists and neo-Nazis held back-to-back rallies in two small Tennessee cities on Saturday to protest refugee resettlement in the state, which sued the federal government over the issue earlier this year.

The “White Lives Matter” rallies in Shelbyville and Murfreesboro, organized by some of the same groups involved in a Virginia march that turned violent in August, drew an equal number of counter-demonstrators and a heavy police presence.

The protesters started in Shelbyville, then traveled about 35 miles north to Murfreesboro for a second rally. Both towns are near Nashville, center of a metropolitan area has become home to refugees from Somalia, Iraq and elsewhere.

“We don’t want the federal government to keep dumping all these refugees into middle Tennessee,” said Brad Griffin, a member of a group known as the League of the South who has written about his desire to create a white “ethnostate.”

Saturday’s rallies were organized by the Nationalist Front coalition, which embraces groups considered neo-Nazi or neo-Confederate by the Southern Poverty Law Center, which tracks hate groups.

To help keep the peace, Shelbyville police used temporary fencing to separate the white nationalists from counter-demonstrators. Anyone seeking to enter the area was searched. Guns, backpacks, sticks and other items that might double as weapons were banned.

The white nationalist demonstrators gathered behind a half dozen white shields emblazoned with red crosses. Counter-protesters carried signs with slogans including “Don’t Hate” and “Veterans for Peace.” Two lines of police, some in riot gear, stood between the two sides, who shouted at each other.

One man was arrested for disorderly conduct, but there were no injuries, local media said. The reports could not be immediately confirmed.

Later in Murfreesboro, where protesters were prohibited from carrying shields, or wearing masks or helmets, the rally remained peaceful, the city said on Twitter.

Local officials and faith leaders had denounced the gatherings, fearing they could inflame racial, ethnic and religious animosities in the state.

Over the last 15 years, about 18,000 refugees have been resettled in Tennessee, less than 1 percent of the state’s population, according to the Tennessean newspaper.

The state filed a lawsuit the federal government in March saying it had been unduly forced to pay for refugee resettlements. It was the first state to bring such a case on the basis of the 10th Amendment, which limits U.S. government powers to those provided by the Constitution. Other states have filed similar suits on different legal grounds.

“When they say refugees, what they really mean is Muslims,” said Ibrahim Hooper, a spokesman for the Council on American-Islamic Relations, referring to Saturday’s protesters.

He noted that a Murfreesboro mosque has been a source of controversy and vandalism for years.

“Tennessee is one of the states that has seen a rise in anti-Muslim bigotry in recent years, particularly since the election,” Hooper said.

President Donald Trump has sought to ban travel from six Muslim-majority countries since he took office and called during his 2016 election campaign for a “total and complete shutdown of Muslims entering the United States.”