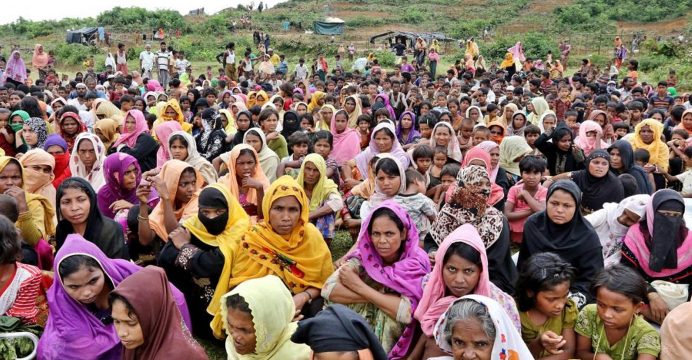 A total of 817,000 Rohingya people are now living in Cox’s Bazar, the southernmost district of Bangladesh, an IOM release said.

“Since 25 August, some 604,000 people have crossed the border, having fled violence in Myanmar. This is in addition to the over 200,000 people who had sought safety in Cox’s Bazar following previous outbreaks of violence. The majority of new arrivals live in crowded makeshift settlements, with only 46,000 people living among the host community,” it added.

IOM, the UN Migration Agency, has been meeting with male and female community leaders in the rapidly growing Kutupalong settlement to assess how best to address residents’ needs and ensure that they know where they can provide feedback and complaints, and who they can come to if they need to report gender-based violence.

Following this meeting, the communities in Kutupalong are now more engaged in the tracking of new arrivals to the settlement. Community meetings will now be held regularly.

IOM and REACH, a non-governmental organization (NGO) working to facilitate the development of information tools and products that enhance the humanitarian community’s decision-making and planning capacity, are mapping community leadership in all sites to enable communities to have more of a say and decision-making power in the humanitarian response in their settlements.

IOM and partners have been working for over two months to ensure that these immediate needs are met. IOM has distributed over 80,000 kits that provided nearly 395,000 families with the necessities to build their own shelter, giving them a place to sleep and stay out of the hot sun and, at times, torrential rains.

With so many people having settled in such a small area, site planning and management is vital for the protection of the Rohingyas. IOM is working with partners and the Government of Bangladesh to ensure access to displacement sites, all of which developed on hilly terrain, which is extremely difficult to reach with services.

“Medical needs in the camps are extremely high, especially considering that many of the Rohingyas would have walked long distances to reach Bangladesh, with many having experienced physical and sexual abuse along the way and are now living in over-crowded sites that were not prepared for inhabitation by more than 800,000 people,” the IOM press release said.