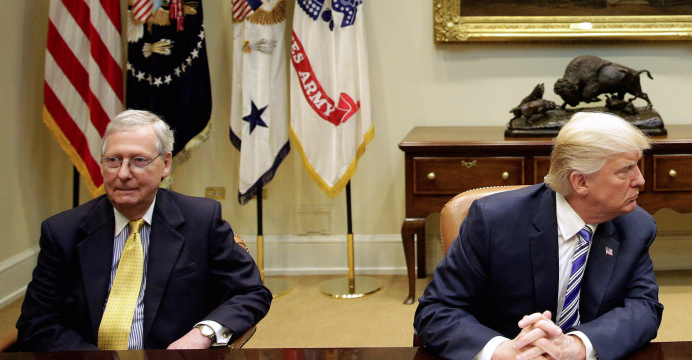 Like the deal-maker he says he is, U.S. President Donald Trump appears to be keeping his options open as his Republican Party threatens to erupt into full-scale war.

On Monday, almost immediately after saying he empathized with the effort by his former strategist Steve Bannon to back challenges against Republican senators in next year’s congressional elections, Trump stood with Senate Majority Leader Mitch McConnell, pledging party unity and saying they were “fighting for the same thing.”

For months, McConnell had been the object of Trump’s wrath for the failure of the Republican-led Congress to repeal and replace the Affordable Care Act, known as Obamacare – a longtime Republican goal and a key promise of Trump’s 2016 campaign.

In the White House Rose Garden, Trump played down any conflict, saying the two were “closer than ever before.”

But Trump would not disavow Bannon’s pledge to take down Republicans who are not fully behind Trump’s agenda and to drive McConnell from the Senate’s leadership.

Bannon, who helped mastermind Trump’s election campaign but left the White House in August, appeared at a gathering of conservative activists on Saturday and declared: “Right now, it’s a season of war against a GOP establishment.”

In comments directed at McConnell, Bannon told the gathering: “Up on Capitol Hill, it’s like the Ides of March. They’re just looking to find out who is going to be Brutus to your Julius Caesar.”

Brutus, once an ally of Caesar, was among the assassins of the Roman leader on the Ides of March in 44 B.C.

Working with well-funded outside political groups, Bannon is encouraging anti-establishment candidates to challenge Republican incumbents in the party’s nominating races for the 2018 elections in which all the seats in the House of Representatives and a third of the Senate are up for election.

Republican leaders, such as McConnell, worry that the anti-establishment candidates might be less palatable to general election voters and cause Republicans to lose their majority in the Senate and possibly also the House.

‘NOT GOING TO BLAME MYSELF’

Asked about Bannon before a meeting of his Cabinet on Monday, Trump said he could “understand where Steve Bannon’s coming from” and took a jab at the Republican-led Congress in the process.

At the later news conference with McConnell, Trump said, however, he may try to persuade Bannon not to back primary challengers in several upcoming congressional races.

“Steve is doing what Steve thinks is the right thing,” Trump said. “Some of the people that he may be looking at (challenging), I’m going to see if we talk him out of that, because frankly, they’re great people.”

Trump is still stinging from his decision to support the Republican incumbent in the recent Alabama Senate primary, Luther Strange, at McConnell’s behest. Strange was beaten handily by arch-conservative Roy Moore, the challenger backed by Bannon.

While it has been unusual for a president to support a primary challenger in his own party, Trump has signaled he may be willing to do so in states such as Arizona, where Senator Jeff Flake, up for re-election next year, has been critical of the White House.