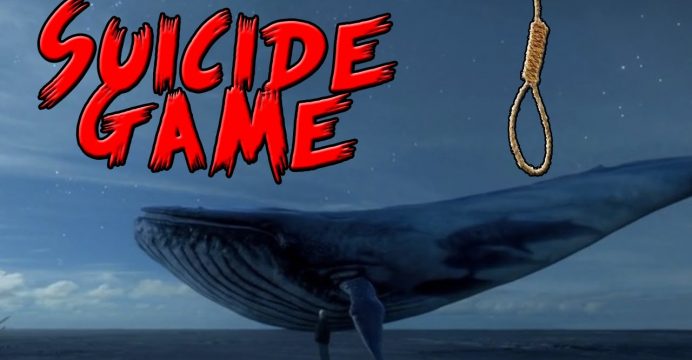 Recently, someone posted a picture of a pre-teen who committed suicide. He had a blue whale tattooed on his hand and the media held the Blue Whale Challenge responsible for his death. Blue whale, a suicidal game, has now spread bitterly in USA, UK, France, Russia and other some countries of Europe as well as in Asia like rumor or horrible way particularly among the young and the teenagers.

It is a ‘game’ played on social media sites where the administrator supposedly hands out tasks of increasing difficulty until finally, the player is asked to end his/her life. The Blue Whale Challenge is not an app, or a game to be downloaded and it is not a group on social media. It is a one-on-one conversation between the player and the moderator. This conversation can happen anywhere on the web.

The ringleader of this deadliest game, Philipp Budeikin, 22, alias Philipp Lis (Fox), was imprisoned by a Siberian court in the country’s first conviction of a so-called administrator of macabre social media death groups preying on vulnerable teenagers. The ringleader had appeared to confess to provoking 17 deaths, but these cases were not included in his trial.

Burdekin branded victims of the game as ‘biological waste’ and told police that they were ‘happy to die’ and he was ‘cleansing society’, said investigators.

Primarily, around 20 Russian suicides are officially linked to the trend which has been branded evil by parents and police, but politicians and the media have suggested the figure runs into the hundreds.

WHAT IS BLUE WHALE CHALLENGE?

There is some confusion about the origins, but the title is believed to be a reference to an act carried out by some blue whales, which appear to beach themselves on purpose, causing them to die.

The name is apparently being used by an alleged online pressure group, which is said to assign a curator to individual participants who then encourage them to complete tests over the course of 50 days.

These assigned tasks reportedly escalate from straightforward demands such as draw tattoo of a whale on hand, taking one’s nude photo, waking up from sleep at last night and wondering outside of the house, watching a macabre video or horror film to something more sinister – even leading to suicide.

Unfortunately, it is not unusual for teenagers to be drawn to social media groups that ultimately have a detrimental effect on their mental health.

The online group associated with the reports is said to have thousands of members and subscribers on Facebook and YouTube. The name has cropped up in countries including Russia, Ukraine, Spain, Portugal, France and the UK.

Alike other some Blue Whale inflicted countries; neighboring India has experienced its crucial outcomes. India is noted as the highest rate of youth suicide in the world. A Lancet study in 2012 showed that between the ages of 10-24, suicide was the leading cause of death.

They have the most number of young people in the world, and adolescents kill themselves in India more than in any other part of the world. If there is something that is contributing to the numbers increasing like the Blue Whale Challenge, yes, they should certainly be worried about it. Suicide is not very well understood, and there are many reasons why India has the highest rate of youth suicide in the world.

A class 9 student of Rajasthan’s Jhunjhunu district who had reached advanced stages of the ‘Blue Whale Challenge’ and prepared to take the fatal plunge while his teacher rescued and ensured his safety. The boy claimed three of his classmates were also playing the controversial game, Jhunjhunu district collector.

Previously, the Supreme Court has even stepped in and is hearing a petition that calls for it’s banning, if that’s possible.

Meanwhile, the federal government has asked Facebook, Google, Instagram, and Whatsapp to remove alleged “links” that reportedly lead to alleged Blue Whale groups or sites. But it is unclear how that can be done too.

Schools have begun issuing warnings to students about its dangers, raising alarm among many parents and feeding into the sense of hysteria.

In the northern state of Uttar Pradesh authorities have banned smart-phones in schools, and one school in Punjab has asked its students to wear short-sleeved shirts so they can check for whale-shaped tattoos – alleged proof of participation.

However, it is good news for Bangladesh that here has yet found any suicidal case related to the blue whale game. Though a rumor was heard a school girl of the capital committed to suicide, abdicated not having any relative cause in this regard. But it is alarming for Bangladeshi young boys and girls, especially the teenaged, who may fall victims into the trap of this game getting inspired from social media’s overflowed caution status/post by friends which may be “advertisement of encourage”!

Md Mehedi Hassan is an undergraduate student of Political Science at the Jagannath University, Dhaka, Bangladesh. He is an Enthusiast in writing and journalism.
No Comments