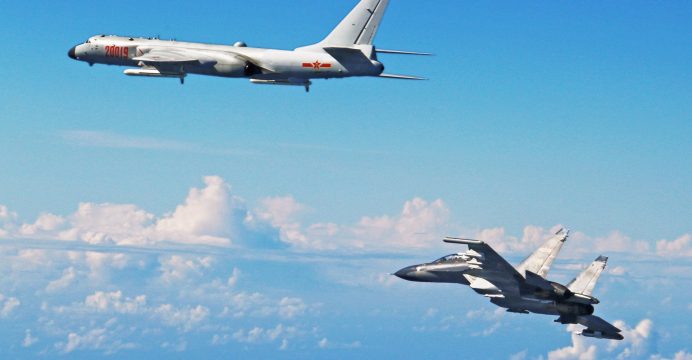 The RAF said its quick reaction alert Typhoon aircraft were deployed on Wednesday morning and safely escorted the plane to the airport, near London.

Flights were temporarily grounded at Stansted but have since resumed.

Ryanair said the flight from Kaunas in Lithuania to Luton was diverted “in line with procedures”.

One passenger, Jonathan Zulberg, said when passengers boarded the flight they saw fire engines and a police car but were not told about a threat being made.

The flight was delayed for up to 40 minutes, he said, and he was told by a stewardess that a bomb threat had been made in Lithuania.

Mr Zulberg said the captain announced that a bomb threat had been made after the plane landed in the UK.

He said: “When I heard I was pretty surprised the plane was allowed to take off.”

A sonic boom could be heard in Suffolk after the Typhoon aircraft were authorised to travel at supersonic speed for the operation, the RAF said.

The aircraft are kept on high alert and can take off “within minutes” from RAF Coningsby and RAF Lossiemouth to defend UK airspace.

Stansted is a designated airport for dealing with hijacks and major security alerts.

Flights were briefly held earlier, the airport said, but it is now open and operating normally.