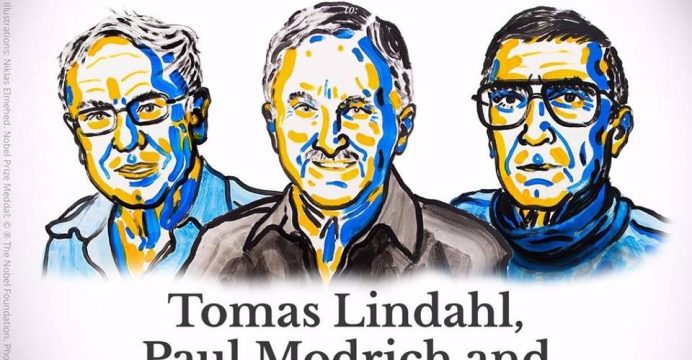 Jacques Dubochet, Joachim Frank and Richard Henderson have won the Nobel Prize in chemistry “for developing cryo-electron microscopy for the high-resolution structure determination of biomolecules in solution,” the Nobel committee announced Wednesday.

Cryo-electron microscopy is “a cool method for imaging the materials of life,” said Nobel committee member Göran K. Hansson from Stockholm. The development allows scientists to visualize proteins and other biological molecules at the atomic level.

Dubochet, a Swiss citizen, is a professor at the University of Lausanne in Switzerland. Joachim Frank, born in Germany, is a Columbia University professor in New York. Richard Henderson, of Scotland, works at Cambridge University in Britain.

To see the structure of molecules at ultra-high resolution, scientists must hold molecules in place in their natural configuration. Other microscopic techniques, such as X-ray crystallography, are far more rigid than cryo-electron microscopy. Stockholm University biochemist Peter Brzezinski said on Wednesday that the future of cryo-electron imaging will not be simply taking still images but those of moving molecules, creating movies that illuminate a world in motion on the atomic scale.

“Cryo-electron microscopy is about to completely transform biology,” said Frank, who had been awoken by the Nobel committee’s telephone call Wednesday morning.

The technique flash-freezes a sample to create a layer of ice like a pane of glass over a layer of liquid where the molecules can retain their natural shape.

Scientists used cryo-electron imaging to quickly determine the shape of the Zika virus once it was identified as the cause of severe birth defects. Knowing the shape of a virus can speed up research into vaccines.

This years winner’s of science Nobel Prizes (in physiology or medicine, physics, and now chemistry) include seven Americans. Asked after the announcement why the U.S. has produced so much Nobel-winning work over the years, Hansson pointed out that since World War II, the U.S. has invested heavily in science and has “allowed scientists to perform fundamental research to focus on important questions of science, without forcing them to have immediate applications and not controlling them in a political way.”

For this year’s award, some Nobel prognosticators gave the nod to John B. Goodenough, 94, inventor of the lithium-ion battery. Gene-editing system CRISPR-Cas9, too, has been an oft-cited contender during the Nobel award season.

Microbes evolved CRISPR to defend against viruses. Scientists have wielded CRISPR as a tool to shape organisms’ genes, demonstrating what a few researchers say is its Nobel-worthy potential. In one recent study, biologists grew butterflies with strange new wing colors. Others created the first mutant ants. Geneticists implanted a black-and-white movie in E. coli bacteria, using CRISPR to store pixels as DNA snippets.