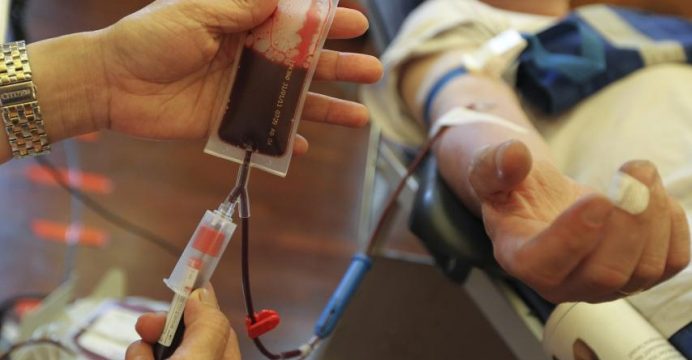 Increasing frequency of blood donation has no major side effects

Giving blood more frequently – up to every 8 weeks for men and every 12 weeks for women – has no major side effects and could help to increase blood stocks, according to the first-ever randomised trial of blood donation involving more than 45000 people in England published in The Lancet.

In the UK, men can donate every 12 weeks, and women every 16 weeks, but the study showed that reducing the interval between donations by 4 weeks (to every 8 weeks for men, and every 12 weeks for women) had no major impact on the donors’ quality of life, mental function or physical activity, and increased the amount of blood collected over two years by 33% (1.7 units) in men and 24% (0.85 units) in women.

However, some people who gave blood more frequently did report minor symptoms including tiredness and restless legs, and the research suggests this may have been due to giving blood.

The findings may help overcome potential risks to blood stocks, including issues attracting and retaining young donors, and increased demand caused by aging populations. In addition, it could help to increase stocks of much-needed universal blood groups and rare blood groups.

“This study suggests that more frequent blood donation is a feasible and safe option for donors in the UK and gives blood services the short-term option of more frequent collection from donors if the supply falls or demand rises,” says senior author Professor John Danesh, University of Cambridge, UK.

Senior author, Professor Dave Roberts, University of Oxford, UK, says: “In the future, we can use our results to predict which donation intervals suit individual donors and move towards personalized donation intervals.”

Lead author, Dr Emanuele Di Angelantonio, University of Cambridge, UK, says: “The study also showed that donors who weighed above average and those with higher initial stores of iron were able to give more blood.”

Although blood donation services have been in place for more than a century, there has been no randomised trial to evaluate the most suitable interval between donations. This has led to varied blood donation policies globally – with current practice in the UK allowing men to donate every 12 weeks and women every 16 weeks, while men and women can donate every 8 weeks in the USA, and in France and Germany men can donate every 8 weeks and women every 12 weeks.

There was no difference in serious adverse events, quality of life, cognitive function or levels of physical activity between people who gave blood most and least frequently.

More than 30500 people in the study provided blood samples at the beginning and end of the study to help measure their iron and hemoglobin levels.

However, the researchers found that the reduced levels of hemoglobinn and iron did not fully explain the increased rate of symptoms experienced by those giving blood most frequently, and propose that more research be done to better understand the causes of these symptoms.

The researchers note some limitations within the study, including that delays between measurements of symptoms associated with blood donation (questionnaires provided throughout the trial, asking about symptoms over the past six months) and haemoglobin and iron levels (measured at the end of the two year study) may explain why the association between iron deficiency and symptoms is weaker than expected.