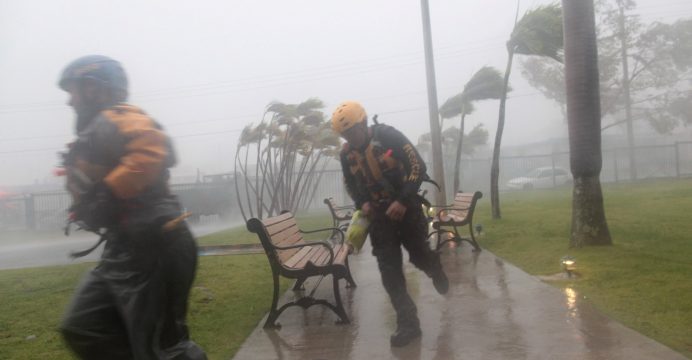 Hurricane Irma killed eight people on the Caribbean island of Saint Martin and left Barbuda devastated on Thursday as one of the most powerful Atlantic storms in a century took aim at Florida.

Television footage of the Franco-Dutch island of Saint Martin showed a damaged marina with boats tossed into piles, submerged streets and flooded homes. Power was knocked out on Saint Martin, Saint Barthelemy and in parts of the U.S. territory of Puerto Rico.

“It is an enormous disaster, 95 percent of the island is destroyed. I am in shock,” Daniel Gibbs, chairman of a local council on Saint Martin, told Radio Caribbean International.

“We did not have the time yet to explore all the shores,” Collomb told Franceinfo radio, adding that 23 people were also injured. In all, at least 10 people were reported killed by Irma on four islands.

Irma caused “enormous damage” to the Dutch side of Saint Martin, called Sint Maarten, the Dutch Royal Navy said. The navy tweeted images gathered by helicopter of damaged houses, hotels and boats. The airport was unreachable, it said.

The hurricane was on track to reach Florida on Saturday or Sunday, becoming the second major hurricane to hit the U.S. mainland in as many weeks after Hurricane Harvey.

The eye of Irma was moving west-northwest off the northern coast of the Dominican Republic on Thursday morning, the National Hurricane Center (NHC) said.

The island of Barbuda is a scene of “total carnage” and the tiny two-island nation will seek international assistance, said Gaston Browne, prime minister of Antigua and Barbuda.

Browne told the BBC about half of Barbuda’s population of some 1,800 were homeless while nine out of 10 buildings had suffered some damage and many were destroyed.

“We flew into Barbuda only to see total carnage. It was easily one of the most emotionally painful experiences that I have had,” Browne said in an interview on BBC Radio Four.

“Approximately 50 percent of them (residents of Barbuda) are literally homeless at this time. They are bunking together, we are trying to get … relief supplies to them first thing tomorrow morning,” he said, adding that it would take months or years to restore some level of normalcy to the island.

Irma hit Puerto Rico early on Thursday, buffeting its capital San Juan with rain and wind that scattered tree limbs across roadways. At least half of Puerto Rico’s homes and businesses were without power, according to Twitter posts and a message posted by an island utility executive.

The NHC said it was the strongest hurricane ever recorded in the Atlantic Ocean and one of the five most forceful storms to hit the Atlantic basin in 82 years.

Irma’s precise course remained uncertain but it was likely to be downgraded to a Category 4 storm by the time it makes landfall in Florida, the NHC said.

It has become a little less organized over the past few hours but the threat of direct hurricane impacts in Florida over the weekend and early next week were increasing, it said.

Hurricane watches were in effect for the northwestern Bahamas and much of Cuba.