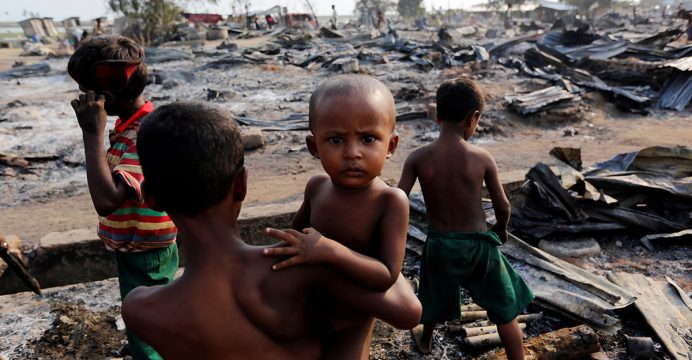 Two dozen corpses believed to be the bodies of Rohingya women and children have washed up on a Bangladesh riverbank as fears grow of atrocities committed by Myanmar forces against the Muslim minority across the border.

In the deadliest violence in decades, nearly 400 people have been killed in a week of fighting in Myanmar’s north-west Rakhine state after Rohingya insurgents attacked security forces and the military responded with a huge counter-offensive.

Close to 38,000 Rohingya have fled their villages and attempted to cross into Bangladesh, according to United Nations estimates. World powers have warned Aung San Suu Kyi’s government to avoid killing innocent civilians.

The latest outpouring of refugees comes amid reports of ethnic violence from an activist group with a presence in the conflict area, accusing Myanmar security forces and Buddhist vigilantes of killing 130 Rohingya in the village of Chut Pyin.

“We were told that the army encircled the village and attacked people when they fled,” said Chris Lewa, director of the Arakan Project, an advocacy group set up to work with the Rohingya.

“According to our information from the ground, at least 130 were killed, most of them died from gunshot wounds,” she said of the incident which occurred on Sunday. “The figure is collected from a list of people who have been buried.”

Myanmar has blocked access to the region for journalists, and the Guardian was unable to immediately confirm the report. Video footage passed to the Guardian showed villages on fire and Rohingya with injuries that resembled gunshot wounds.

A government spokesperson was unreachable on Friday. Authorities said Rohingya were burning their own villages and the armed forces were protecting civilians against “terrorist extremists”.

Lewa said security forces had “burned village after village. It is systematic”. However, she added that some Rohingya arsonists had set fire to the Buddhist village of Pyu Ma.

New York-based Human Rights Watch said on Tuesday that satellite images showed burning across at least ten areas of the northern parts of Rakhine state, the region that borders Bangladesh.

From the Bangladesh side, plumes of smoke rose from a forest in Myanmar, and UN sources said around 20,000 Rohingya were stranded in no man’s land between the two countries.

The military said on Thursday that about 370 “terrorists”, 13 security forces, two government officials and 14 civilians had been killed in a week of clashes.

Security forces have responded this week with clearance operations which they say are to weed out the militants but that members of the Rohingya diaspora allege amount to ethnic cleansing.

The office of the de facto leader, Aung San Suu Kyi, has blamed civilian killings and village burnings on Arsa. Myanmar has evacuated thousands of Buddhists from Rakhine, an area that has seen episodes of bloody sectarian violence between Buddhists and Muslims for years.

The bodies of 11 Rohingya children and 9 women washed up on the Bangladesh side of the Naf river after their boat overturned, according to Bangladesh border guard commander Ariful Islam. He said the bodies of two women and two children were also recovered after Myanmar’s border guard police fired on their boat.

At the United Nations, the US ambassador Nikki Haley condemned Arsa but added: “As Burmese security forces act to prevent further violence, they have a responsibility to adhere to international humanitarian law, which includes refraining from attacking innocent civilians and humanitarian workers.”

Aung San Suu Kyi’s office has accused foreign aid workers of helping “terrorists”, a claim that has prompted fears for their safety and was condemned as dangerously irresponsible.

“Many thousands of people are increasingly at risk of grave violations of their human rights,” she said in a statement. “The worsening cycle of violence … must be broken urgently.”

In the Bangladeshi border district of Cox’s Bazar, makeshift camps for the tens of thousands of displaced were set up last October when another insurgent attack on border guards resulted in a huge counteroffensive that was internationally condemned as disproportionate.

One arrival, Mohammed Rashid, 45, wore a surgical dressing under his eye, saying bullet splinters injured him after the Myanmar army opened fire on a group of Rohingya.

He said about 100 people made their way to the border together, and he saw explosions and people dying.

“We hid in the forest for two days and then we were stopped at the border, but we got through. We heard that the houses in our village have burned down,” Rashid said.

Communal hatred has simmered in the region for years, with an estimated 1.1 million Rohingya suffering persecution in a country that refuses to grant them citizenship.

In 2012, clashes with Buddhists in Rakhine caused 140,000 Rohingya to flee their homes. Thousands more have died at the hands of people smugglers and traffickers.

The continuing violence against Rohingya has been the most high profile issue for Aung San Suu Kyi, a former political prisoner whose landslide election in 2015 was celebrated internationally as a victory against oppressive military rule.

Bangladesh, where more than 400,000 Rohingya who fled Myanmar since the early 1990s still live, is also growing increasingly hostile to refugees and has turned some back.

The UN high commissioner for human rights, Zeid Ra’ad Al Hussein, said while he condemned the violent attacks by militants, “decades of persistent and systematic human rights violations” against Rohingya “have almost certainly contributed to the nurturing of violent extremism, with everyone ultimately losing.”