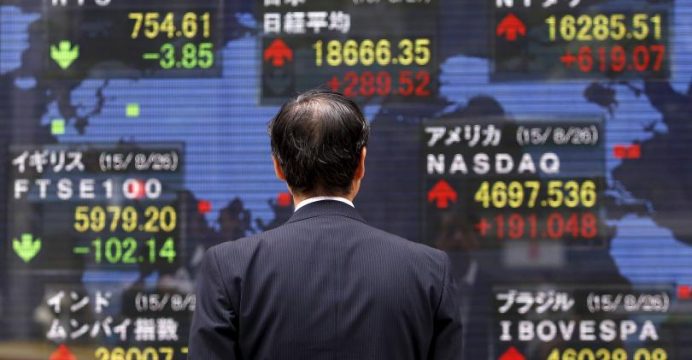 Asian stocks mostly rose on Wednesday, extending a global equities rally driven by growing optimism over a US tax reform plan and as investors look ahead to a key central bankers meeting.

Markets have bounced back after struggling in recent weeks due to the continuing standoff between the US and North Korea, which has been compounded by Thursday’s terror attack in Barcelona, reports BSS.

The US president’s woes have fuelled speculation he will struggle to push through his market-friendly economy-boosting policies that fanned a global market rally in the months after his November election.

Despite ongoing chaos at the White House, markets have been heartened by reports suggesting that the Trump administration was making headway on a tax reform plan.

“Some of the US political uncertainty may have been removed by a report on the Trump administration making progress on tax reform, but a wait-and-see mood is strong ahead of Jackson Hole and tensions in North Korea still in place,” Tsutomu Nakamura, strategist at Ueda Harlow Corp. in Tokyo, said in a commentary.

Hong Kong’s stock market was closed as powerful Typhoon Hato brought the southern Chinese city to a standstill.  All eyes are on the Jackson Hole symposium in Wyoming at the end of the week, which brings together the world’s top central bank chiefs.

Much of the attention will be on Federal Reserve boss Janet Yellen, with hopes for some clues about the bank’s plans to wind in its huge bond holdings.

“No one has a lot of interest in being very negative in the market right here, knowing that there’s this what-ever-it-takes backdrop where central bankers globally just have zero interest in seeing financial conditions tighten too much,” Dennis DeBusschere, head of the portfolio strategy at Evercore ISI, told Bloomberg Television.