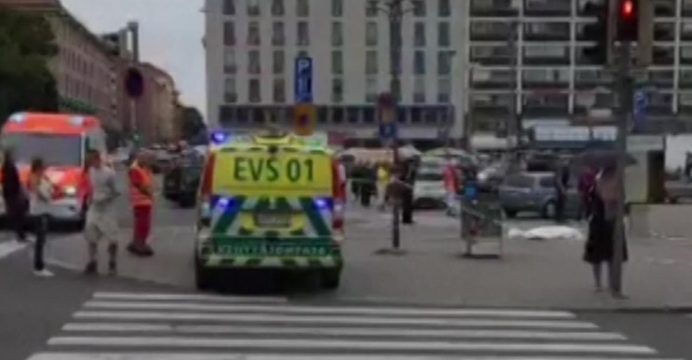 A man with a knife killed two people and wounded at least six in a stabbing rampage in a market square in the Finnish city of Turku on Friday, police said.

Police shot the suspected attacker in the leg and arrested him. They said they had yet to establish the identity of the man who appeared to be of foreign origin, or his motive.

They warned people to stay away from the city and reinforced security nationwide, with increased patrols and more surveillance, in case more people were involved. People were allowed to return to the city center a few hours later, reports Reuters.

“At this stage, there is only one suspect and we are investigating whether there are more people involved … but it looks likely (he was alone),” said Markus Laine from the National Bureau of Investigation.

“At this stage, we do not investigate this (as a terrorism attack) but the possibility has not been ruled out,” he told a news conference.

Interior Minister Paula Risikko said: “We have not been able to confirm the person’s identity… we have been in contact with the immigration service as the person looks like a foreigner.”

Eyewitnesses described the panic at the scene.

“A man walked towards the ice cream stand where I work, and he hit a woman three times. He started running, went past my kiosk, and he had a knife in his hand,” Terttu Lehtinen told Reuters.