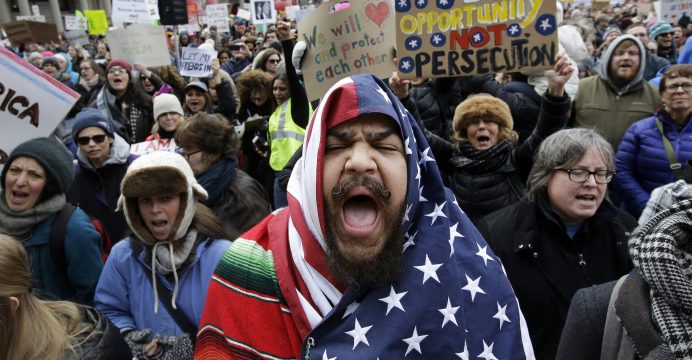 Thousands take to streets in Boston protest against hate speech

Thousands of people in Boston protested a “Free Speech” rally featuring right-wing speakers on Saturday, with hundreds of police mobilized to prevent a recurrence of violence that left a woman dead at a Virginia white-supremacist protest last week.

In historic Boston Common park alone, hundreds of protesters who believe the event could become a platform for racist propaganda dwarfed the few dozen rally participants.

The number of protesters was poised to swell exponentially as a march with thousands more people bore down on the park, reports Reuters.

Some 500 police officers placed barricades to prevent vehicles from entering the park, the nation’s oldest. To keep the two groups separate, they also built a cordon around the site of the rally.

Last weekend’s clashes in Charlottesville, Virginia, where one woman was killed in a car rampage after bloody street battles, ratcheted up racial tensions already inflamed by white supremacist groups marching more openly in rallies across the United States.

White nationalists had converged in the Southern university city to defend a statue of Robert E. Lee, who led the pro-slavery Confederacy’s army during the Civil War, which ended in 1865.

A growing number of U.S. political leaders have called for the removal of statues honoring the Confederacy, with civil rights activists charging that they promote racism. Advocates of the statues contend they are a reminder of their heritage.