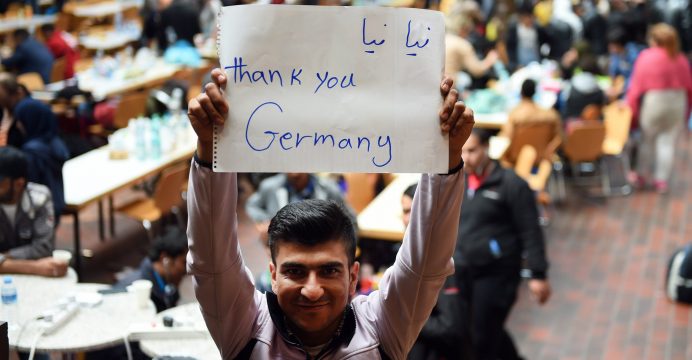 As Germany struggles to absorb more than a million migrants from the Middle East and Africa, the government is hoping to avoid the mistakes it made half a century ago when it brought in a generation of guest workers from Turkey.

In the 1960s, hundreds of thousands of Turkish men were invited in to fill labor shortages. But Germany made no attempt to help them learn the language or upgrade their skills.

The result is that three million Turks in Germany are still struggling today. They are the least integrated minority, with an unemployment rate of about 16 percent, almost three times the national average, reports Reuters.

Now, two years after it threw open its doors to the latest migrants, Germany has devised an integration strategy based on language and job training intended to get the newcomers into work and off welfare. Among the changes are 600 hours of mandatory language lessons and fast-tracked work permits.

These measures are starting to show signs of success: a growing number of migrants are joining a labor market where a record 1.1 million jobs are unfilled.

“Things are very different here,” said Merhawi Tesfay, a 32-year-old Eritrean who was hired by Kremer Machine Systems, an engineering company in the town of Gescher in western Germany.

“In Eritrea you find work through word of mouth. Here you have the Job Centre and online job sites. Everything comes with too much bureaucracy and my German wasn’t good enough.”

Tesfay was hired initially as a trainee and then full-time, through ELNet, a government-funded project run by charities who assign mentors to refugees. He had been looking for work for almost three years.

Waves of migrants, many forced to flee Syria’s civil war, began arriving in large numbers two years ago, one of the biggest migration movements Europe had seen since World War Two.

The challenge now for Germany, which took in the largest number of the incomers in western Europe, is to integrate them into society over the long term.

With its strong economy, Germany is better placed than many European countries, especially in southern Europe, to accept migrants. German unemployment is at its lowest since 1990 and seven straight years of growth mean the government can afford to put aside more than 10 billion euros a year for refugees.

“The lesson that Germany learnt is that integration is something you work on,” said Herbert Bruecker of Humboldt University of Berlin. “It doesn’t happen on its own”.

When the first Turkish guest workers arrived in the 1960s, German politicians, still preoccupied with rebuilding the economy after World War Two, regarded them as a temporary measure. The perception was that Turks were guests who would go back home.

The Turks of course did not go home. And their wives and children began following them, just as the oil crisis of the early 1970s pushed Germany into a recession that cost many guest workers their jobs.

With low skills and little grasp of the language, many found it hard to find work again as Germany shifted away from industry towards automation and services.

This time, Germany has taken a different approach.

One month after her decision to open Germany’s borders to refugees fleeing war and persecution, Chancellor Angela Merkel told parliament in September 2015 that Germany should learn from its mistakes with the Turkish guest workers and seek to integrate asylum seekers from day one.

Since then, her government has focused on language and vocational training to help 1.2 million asylum seekers get into a manpower-hungry labor market and wean them off Germany’s generous welfare system.

Under legislation approved in August 2016, integration courses including language learning were made mandatory for all refugees and asylum seekers from countries such as Syria, Eritrea and Afghanistan.

The new rules also included a ‘Give and Take’ clause giving authorities powers to cut financial aid to asylum seekers if they don’t attend language courses.