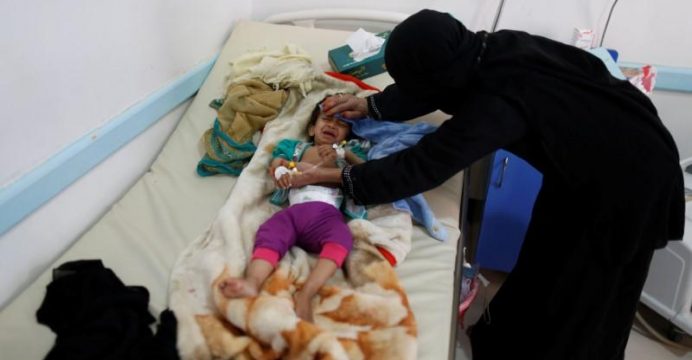 Yemen is on the brink of a catastrophic disaster, International Development Secretary Priti Patel warned today, as she urged the international community to follow the UK’s push to stem the country’s cholera outbreak – the worst ever recorded in a single year.

The number of suspected cases of cholera is nearing half a million and the UK is working with organizations including UNICEF and the International Organisation for Migration (IOM) to tackle the disease which has so far claimed thousands of lives.

The UK’s support will provide medical supplies, such as chlorine tablets and hygiene kits, for half a million people and rehabilitate medical facilities to help 250,000 people. 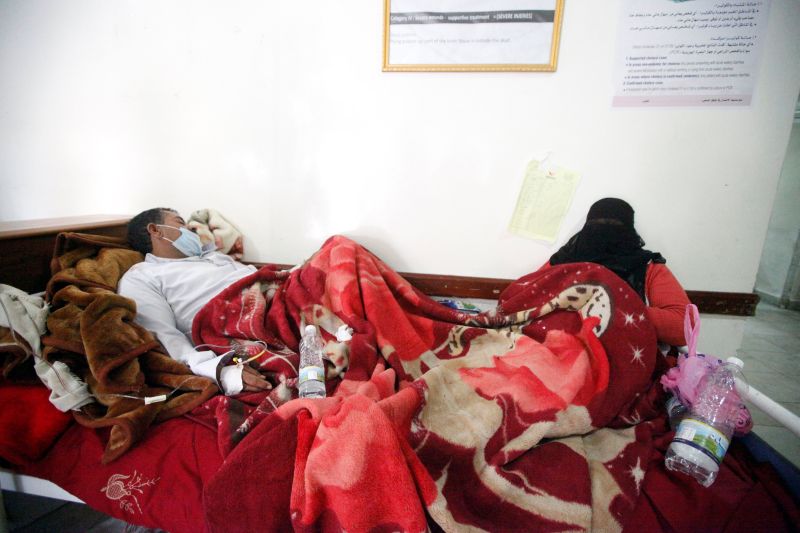 A man and his wife infected with cholera lie on a bed at a hospital in Sanaa, Yemen

The UK’s efforts will prevent and treat cholera across three of the most affected areas of Yemen: 300,000 people will benefit from access to safe, chlorinated water, helping to prevent the further spread of the disease; while seven health centers and 35 oral rehydration points will treat more than 27,300 cases.

British support will also include the secondment of an international health specialist from IOM to the Emergency Operations Centre in Sana’a to strengthen the response to contain cholera.

International Development Secretary Priti Patel said, “Yemen is on the brink of a catastrophic disaster if the world continues to close its eyes to the urgent help three-quarters of people across the country desperately need.”

“The response by the international community is the only hope Yemeni people have to survive. UK aid is providing lifesaving food for 1.7 million people, as well as clean water, emergency healthcare and sanitation to contain the cholera outbreak and prevent it from spreading further.”

“The international community must follow Britain’s lead and join our efforts and step up support to avert famine and cholera engulfing the country.”

UK aid is already saving lives – our support to UNICEF has provided cholera treatment kits for 60,000 people and oral rehydration salts to treat over a million people, as well as rehabilitating the rural water supply systems in Hajjah and Sa’ada so that 74,000 people can access clean water.

Other partners, including the Yemen Humanitarian Pooled Fund, are also tackling cholera through reprioritisation of their work within the UK’s existing support. This includes providing medical treatment for vulnerable women and children, training health workers, and establishing oral rehydration centers.

Cholera is a bacterial disease, usually spread through contaminated water, which causes severe diarrhea and dehydration. The risk of cholera is highest when poverty, war or natural disasters force people to live in crowded conditions without adequate sanitation. Cholera can be fatal in a matter of hours if left untreated, but with medical support can be easily remedied.

Prevention is equally important and the UK is supporting chlorination campaigns in more than half the country’s governorates, as well as public awareness sessions on how the disease is spread. UK support is also tackling the underlying causes of cholera by helping to provide emergency nutrition, health, water and sanitation to over a million Yemenis.