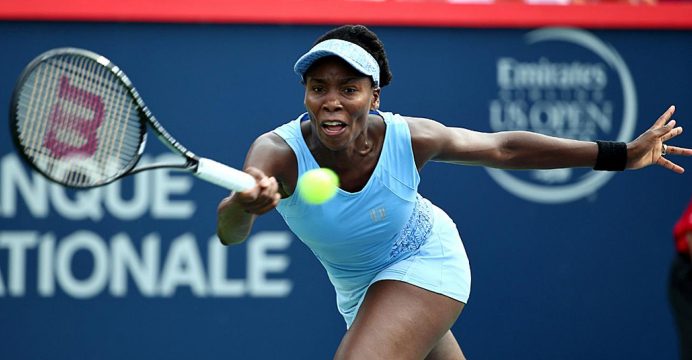 Venus Williams prevailed in a three-setter but French Open champion Jelena Ostapenko and 13th seed Kristina Mladenovic crashed out of Rogers Cup with first round defeats on Monday.

Venus wins in Rogers Cup Less than a month after her run to the Wimbledon final, where she lost to Spain’s Garbine Muguruza, 37-year-old Williams again had to turn back time against a young challenger.

After taking the opening set in dominant fashion, the American found herself in a fight as Begu rallied back to win a set before rain suspended action for more than an hour.

The decisive set was a rollercoaster with Williams moving ahead 3-1 only to lose consecutive games before bouncing back to seize three straight games and the match.

Earlier, Mladenovic was swept aside 6-2 6-3 by Czech Barbora Strycova while Ostapenko fell to American Varvara Lepchenko as upsets marked the start of the tournament.

Strycova’s stunning triumph was followed by another surprise victory when 12th seed Ostapenko lost 1-6 7-6(2) 7-6(5) to American Lepchenko in two hours and 36 minutes.

After breezing through the first set, the 20-year-old Ostapenko’s nerves began to show and unforced errors helped Lepchenko, 31, take the final two sets in tiebreaks.

The Czech’s six aces and 32 winners were too much for the 28-year-old Navarro, who had no aces and just seven winners.

“I’m feeling pretty tired right now,” said Kvitova, who was trailing 4-1 in the second set before winning the tiebreak.

“I’m trying to come back as soon as possible but it is just a matter of time,” added the 14th seed.