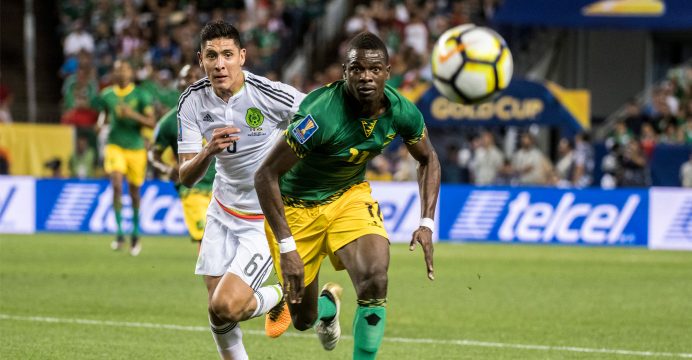 Jamaica and El Salvador both punched their tickets to the quarter-finals after playing to a 1-1 draw in a Group C match at the 2017 CONCACAF Gold Cup tournament on Sunday.

Jamaica now have one win and two draws which moves them into first place in the group standings with five points — just ahead of seven-time champions Mexico who have a game in hand.

Mexico were aiming re-take the top spot with a win over Curacao later Sunday in the final game of group play.

Nelson Bonilla opened the scoring in the 15th minute for El Salvador, who avoided a defeat which would have seen them playing Group B’s Martinique in an elimination round tiebreaker.

Bonilla scored on a left footed shot to the far post at the Alamodome arena. It was the first goal given up by the Jamaican defence in the tournament.

Darren Mattocks tied it up in the 64th minute for the Reggae Boyz with a perfectly-placed low, hard shot that beat El Salvador goalkeeper Derby Carrillo. It was Mattocks’ fifth goal in six Gold Cup contests.

El Salvador returns to the quarter-finals for the first time since 2013 after they failed to advance out of the knockout round in 2015.