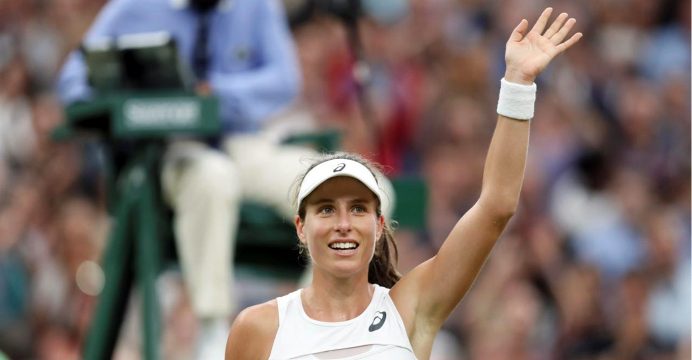 Johanna Konta won a place at the Wimbledon semi-final table on Tuesday in a feast of tension-filled tennis, powering past Simona Halep in three epic sets to become the first British woman to reach the last four in almost 40 years.

In a match dripping with tension towards the business end of one of the most open women’s grasscourt grand slams in years Konta rode a wave of home support to win 6-7(2) 7-6(5) 6-4.

The sixth seed and second-seeded Halep were facing each other for the first time since a turbulent Fed Cup tie in April.

Serving up the only tennis show in town as the rain drummed down outside the roofed-in Centre Court and avoiding eye contact at changeovers, the pair also had the extra weight of history to contend with.

Konta, working hard to keep her opponent pinned behind the baseline, was bidding to book a date with Venus Williams on Thursday as the first home semi-finalist since Virginia Wade in 1978, the year after Wade won the title.

Halep, scampering from wing to wing as she soaked up the pressure, was one match from becoming the first Romanian to top the computerised world rankings – a distinction that, following her defeat, passed to Czech Karolina Pliskova. The refined surroundings of the main showcourt were a world away from the tiny stadium on the Black Sea where the two players last met, Halep winning that encounter in straight sets.

Konta became tearful during her other singles match in that Fed Cup tie, against Sorana Cirstea, blaming what she called a hostile reception from Romanian fans who Halep this week described as “very fair”.

On Tuesday the Australia-born Briton struggled to take it all in too — but for altogether different reasons.

“Right now it’s a little bit surreal,” she told the BBC after sealing victory in just under two-and-three-quarter hours.

“Simona… was really not going to give me much for free so I definitely had to be the one out there to create my own chances and I felt I did that.”

Konta said she was “excited and humble” to be facing Venus Williams, a match that Wade predicted the Briton would win.

“It’s fine to be the last British women’s winner (at) …Wimbledon, but it’s better to have plenty of British players to win,” Wade said in comments released by the All England Club.

“If I get a chance I will tell (Johanna) how well she played and wish her good luck.”