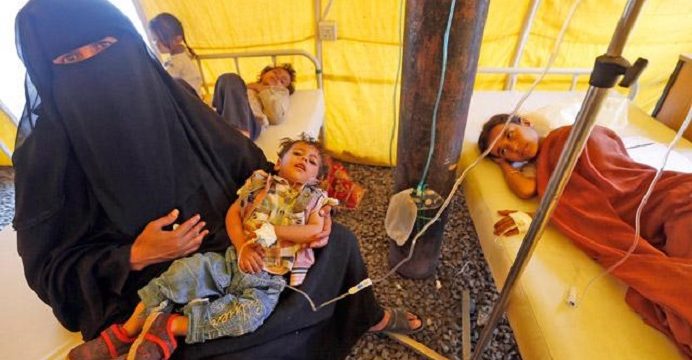 A 10-week cholera epidemic has now infected more than 300,000 people in Yemen, the International Committee of the Red Cross (ICRC) said on Monday, a health disaster on top of war, economic collapse and near-famine in the impoverished country.

The World Health Organization has said there were 297,438 suspected cases and 1,706 deaths by July 7, but it did not publish a daily update on Sunday when the 300,000 mark looked set to be reached. A WHO spokesman said the figures were still being analyzed by Yemen’s health ministry, reports Reuters.

Although the daily growth rate in the overall number of cases has halved to just over 2 percent in recent weeks and the spread of the disease has slowed in the worst-hit regions, outbreaks in other areas have grown rapidly.

The most intense impact has been in areas in the west of the country which has been fiercely contested in the two-year war between a Saudi-led coalition and armed Iran-aligned Houthi rebels.

The war has been a breeding ground for the disease, which spreads by faeces getting into food or water and thrives in places with poor sanitation. In the past week, a first few cases have appeared in Sayun city and Mukalla port in Hadramawt region in the east.

Yemen’s economic collapse means 30,000 health workers have not been paid for more than 10 months, so the U.N. has stepped in with “incentive” payments to get them involved in an emergency campaign to fight the disease.

The WHO has said its response, based on a network of rehydration points and the remnants of Yemen’s shattered health system, has succeeded in catching the disease early and keeping the death rate from the disease low, at 0.6 percent of cases.

The spread of the disease is also being limited by “herd immunity” – the natural protection afforded by a large proportion of the population contracting and then surviving the disease.

It is not yet clear how people could be affected in total. Early in the outbreak, the WHO said there could be 300,000 cases within six months, but on June 27 it said the epidemic may have reached the halfway mark at 218,800 cases.

However, since then, the daily number of new cases has risen from an average of about 6,500 to about 7,200, according to a Reuters analysis of WHO data.