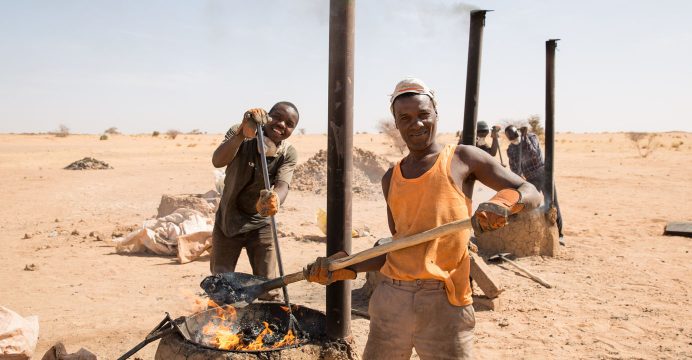 IOM, the UN Migration Agency, urged youth leaders, during the Annual African Youth Conference (AAYC) on Social Justice and Democracy, to become advocates for more informed discussions on the nature and causes of migration from Africa.

Beginning Friday, 30 June, the four-day event’s overarching theme was, “The G20 and The Global Order of the Rich, for the Rich, by the Rich?” The Conference brought together 40 youth leaders from the Friedrich-Ebert-Stiftung (FES) Youth Leadership Programs in East, West and Southern Africa representing progressive political parties, trade unions, civil society organizations and social movements.

IOM regional thematic specialists for the African region attending the conference stressed the need to counter media portrayals of African migration as being primarily driven by poverty and conflict, and mainly Europe-bound. Jason Theede and Claudia Natali pointed out that migration from Africa to Europe is not a new phenomenon, and that migration in the region continues to be predominantly between African countries.

“It’s imperative to move from false stereotypes to informed empirical research about the continent,” said Theede, Senior Regional Thematic Specialist in Southern Africa, during his presentation on trends, patterns and drivers of African migration. He cited the 2015 Migration Report from the UN Department of Economic and Social Affairs Population Division (UNDESA), which found that Africans comprise only 34 million, or 14 per cent of the 244 million international migrants worldwide.

Theede commented that one of the G20 topics this year, “Flight and Migration”, highlights the influence that media coverage has when focusing on massive flows of migrants and refugees crossing the Mediterranean.

The UNDESA report shows that 52 per cent of African migrants (18 million) live in a country in the same region from where they came. “Migration in Africa has been and still is predominantly intra-regional; promoting and facilitating youth mobility within the continent holds a tremendous development potential for the continent,” said Natali, Regional Labour Migration Thematic Specialist in West Africa, in the plenary session entitled, ‘Migration Within and Out of Africa’.

The Conference builds on the themes and outcomes of the FES Youth Leadership Programs in 15 countries and three Regional Economic Communities in Sub-Saharan Africa. Over the past ten years, more than 2,000 young men and women have participated in these programmes.