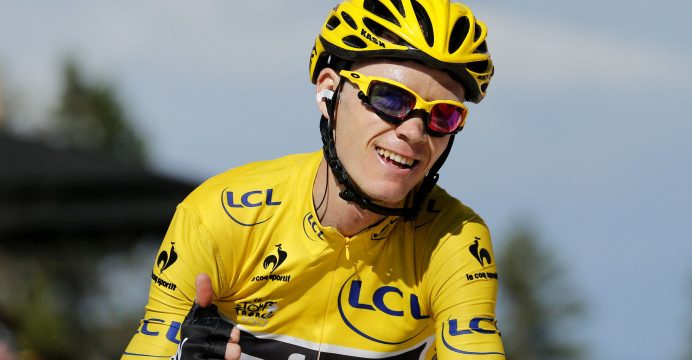 Chris Froome got a brutal reminder of the unpredictable nature of the Tour de France when he crashed to the ground in Sunday’s second stage, recovering to finish with torn shorts as German Marcel Kittel powered to victory at the end of a huge sprint.

After being faster than his rivals in Saturday’s opening time trial, defending champion Froome was sitting comfortably near the front of the peloton when he was brought down as a Katusha rider lost his balance in front of him some 30km from the finish.

“I have no injuries thankfully – I’ve just lost a little bit of skin on my backside. That’s the nature of the race,” said Froome.

The Briton’s Sky team mate Geraint Thomas and last year’s runner-up, Frenchman Romain Bardet (AG2R-La Mondiale), were also involved in the pile-up but made it back to the main pack along with three-time champion Froome after a brief chase.

Thomas, who was quicker to get back on his back and sustained no injuries, retained the overall leader’s yellow jersey at the end of the 203.5-km ride from Duesseldorf in Germany, ahead of Swiss Stefan Kueng (BMC Racing) and Kittel.

“When that (a crash in the front) happens there’s nowhere to go, said Thomas. “There is no real damage at all, he (Froome) lost a bit of skin, but it’s all good. You’ve got to be super lucky to miss it and avoid it.”

There was also a big scare for Bardet.

“Everyone slammed on the brakes, so I was taken down by the riders in front of me. It’s never good to crash, but this was okay,” the AG2R-La Mondiale rider said.

“I hope I will have a good night’s sleep. I was able to get back up on my bike very quickly, and the whole team surrounded me, so I lost no time. It could have been much worse.”

Breakaway riders American Taylor Phinney (Cannondale-Drapac), nearing his best after a serious leg injury in 2014, and Frenchman Yoann Offredo (Wanty-Group Gobert), were given some breathing space as the pile-up slowed down the peloton.

However the sprinters’ teams organized themselves in the finale and the duo were reined in 1.1 km from the line.