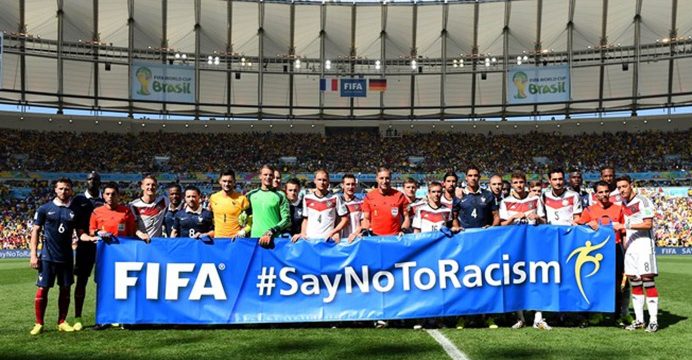 FIFA to step up anti-discrimination mechanisms at Confederations Cup

For the first time in an official tournament, FIFA will use a three-step procedure in case of discriminatory incidents and also deploy anti-discrimination observers at all matches of the FIFA Confederations Cup 2017.

With this three-step procedure, referees will have the authority to first stop the match and request a public announcement to insist that the discriminatory behaviour cease, to then suspend the match until the behaviour stops following another warning announcement, and finally, if the behaviour still persists, to decide to abandon the match.

The anti-discrimination observers, meanwhile, are a natural continuation of the monitoring system that FIFA has put in place to monitor FIFA World Cup™ qualifiers and selected friendlies. The match observers are coordinated and trained by the Fare network, an organisation with a long track record of monitoring and fighting discrimination in football. Based on Fare’s ‘Global guide to discriminatory practices in football’, the match observers will monitor the behaviour of fans from both teams, as well as any spectators who are not affiliated to a particular team playing in the match.

Besides the reinforcement of controls and sanctions, awareness-raising and education is another key pillar of the strategy that has been put in place. A video will be played on the big screens of the FIFA Confederations Cup stadiums featuring football legends conveying the anti-discrimination message.

At the semi-finals in Kazan on 28 June and Sochi on 29 June, FIFA and the Local Organising Committee (LOC) will also celebrate the FIFA Anti-Discrimination Days with a special pre-match protocol, an annual event that has been part of the FIFA calendar since 2001.