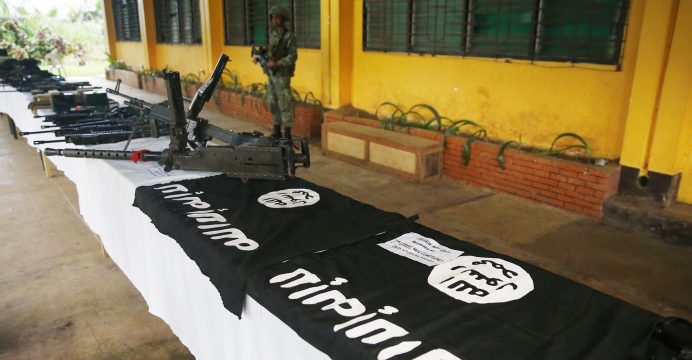 Indonesia says 1,200 IS operatives in Philippines

There are about 1,200 Islamic State (IS) group operatives in the Philippines, including foreigners of whom 40 are from Indonesia, the Indonesian defence minister told an international security forum Sunday.

Speaking in Singapore amid a bloody standoff between Philippine troops and militants fighting under the IS flag in Marawi city, Defence Minister Ryamizard Ryacudu called the militants “killing machines” and urged full-scale regional cooperation against them.

“I was advised last night, 1,200 ISIS in the Philippines, around 40 from Indonesia,” Ryacudu told the Shangri-La Dialogue, using another name for the IS group.

The threat of heightened terrorism, including the impending return of hundreds of Southeast Asian fighters who fought with IS in Syria and Iraq, has been a hot-button issue at the three-day Singapore summit also attended by US Defense Secretary Jim Mattis.

Hundreds of Islamist gunmen rampaged through Marawi, a largely Muslim city of 200,000 in the south of the mainly Catholic Philippines, on May 23 after government forces attempted to arrest their leader, Isnilon Hapilon.

Up to 50 gunmen are still controlling the city centre nearly two weeks after the start of fighting that has killed 177 people including 120 militants.

“How can we tackle these foreign fighters? We have to be comprehensive,” said Ryacudu, a retired general.

“We have to find… complete ways but we must exercise caution, they are killing machines. Their aim is to kill other people so that’s why it’s our responsibility that we have common understanding, consensus and common proceedings on how to fight these foreign fighters.” Philippine Defense Undersecretary Ricardo David, speaking at the same forum, said the 1,200 figure for total IS fighters in the Philippines mentioned by Indonesia was new to him.

But David said there were 40 foreign IS fighters among those who seized parts of Marawi, eight of whom have been killed by government forces.

“Our intelligence estimates that there are about 40 foreigners that fought in the Marawi incident,” David said.

The Philippine official added that the foreign fighters used “back channels” in the Sulu and Celebes Seas near the borders of the Philippines, Indonesia and Malaysia to enter the southern island of Mindanao and link up with local terror groups.

“That’s why they were able to muster the operations in the area of Marawi,” David said.