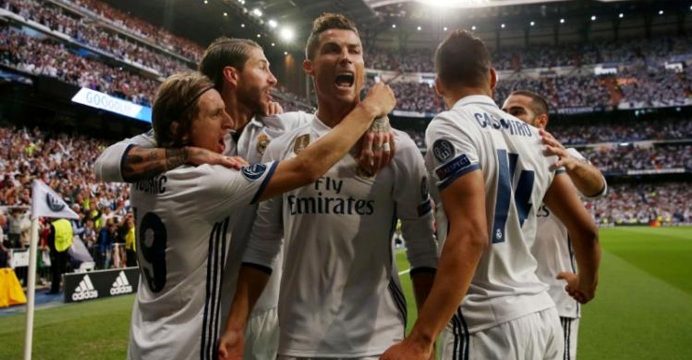 A ruthless Cristiano Ronaldo scored a dazzling hat-trick to lead Real Madrid to a crushing 3-0 victory over city rivals Atletico Madrid in the first leg of their Champions League semi-final on Tuesday.

The Portuguese forward put his team on the verge of their third final in four years and took his tally to 103 goals in the competition as he helped Madrid vanquish their neighbors at the Santiago Bernabeu.

It was another demoralizing European defeat for Atletico at the hands of Real, who had beaten Diego Simeone’s side in two of the competition’s last three finals.

The plaudits, however, belonged once again to the extraordinary Ronaldo, who followed up his hat-trick against Bayern Munich in the quarter-final second leg at the Bernabeu with another superb treble, his 42nd in all for Madrid.

“It is great to have a player like Ronaldo. You need someone to score to get the result and he is unbelievable,” Real midfielder Toni Kroos said, praising his team mate on BT Sport.

Ronaldo headed home in the 10th minute after Casemiro’s bouncing cross caught out Atletico’s defense, before putting his team on the verge of another final appearance after the break. 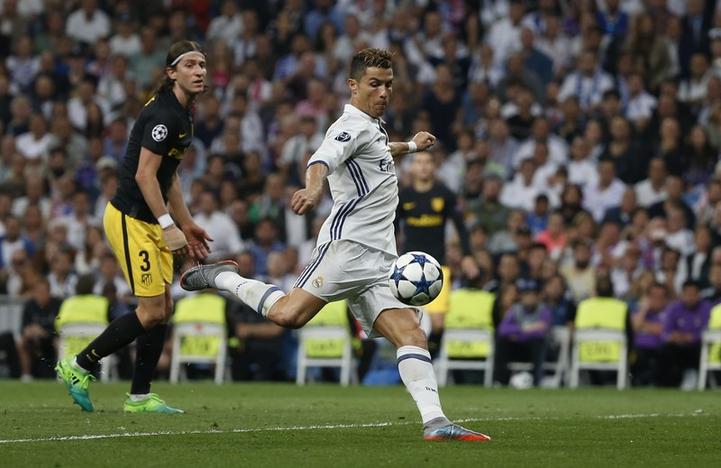 Karim Benzema set him up to smash home his second on the half-volley in the 73rd minute and he finished from close range with four minutes remaining as Atletico offered little resistance.

“We are very happy with the game, with the three goals and above all keeping a clean sheet at home,” said Real’s coach Zinedine Zidane, after taking a huge step closer to guiding his side towards becoming the first to successfully defend the European Cup since AC Milan in 1990.

Yet the prospect of a La Liga-Champions League double was also on his mind with his side currently lying in second place in the Spanish title race on the same number of points as Barcelona but with a game in hand.

“I’m very proud of everyone. We are going to enjoy it, rest, and then tomorrow start thinking about our game in La Liga (at Granada on Saturday),” Zidane added.

The visitors’ best chance came during an intense first half, when Kevin Gameiro broke through after 17 minutes but was foiled by Keylor Navas as he tried to round the Madrid goalkeeper. 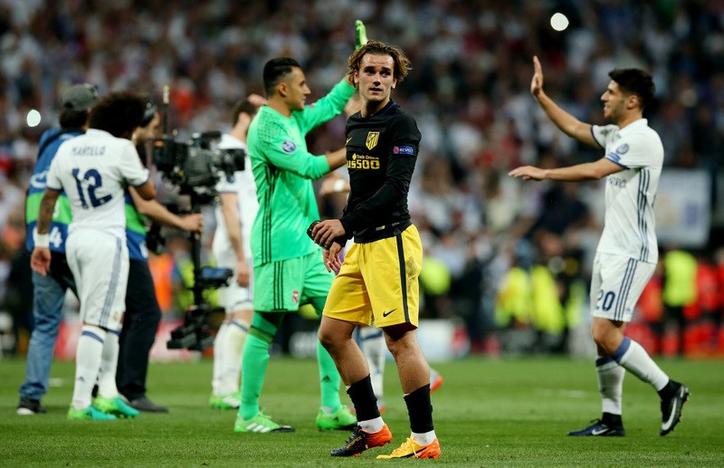 Diego Godin lunged in to divert an Antoine Griezmann free kick inches over the crossbar as Atletico sought an equalizer but after that it was one-way traffic as Madrid imposed their dominance on their neighbors once more in European competition.

Madrid captain Sergio Ramos was lucky to escape punishment after crashing his forearm into the back of Lucas Hernandez’s head shortly before halftime, but Atletico’s headache after this defeat will last longer than the Frenchman’s bruise.
Simeone’s side did not offer their usual fight in the second half as Madrid killed the game off, and perhaps the tie, with Ronaldo, playing in a center-forward role alongside Benzema, the executioner.

His unstoppable strike from the edge of the box doubled Madrid’s lead and he completed his hat-trick shortly before the end after good work by substitute Lucas Vazquez.

Ronaldo also scored all three goals as Madrid beat Atletico by the same scoreline at the Vicente Calderon in La Liga last November and Tuesday’s treble means Atletico’s final European game there next week is now likely to be a somber affair.

Yet the irrepressible Simeone has not given up hope of the most improbable of comebacks quite yet.

“Football is wonderful, it’s impossible and unexpected things happen. It’s wonderful. Until the last chance expires, we will play (to reach the final),” the Argentine told reporters.