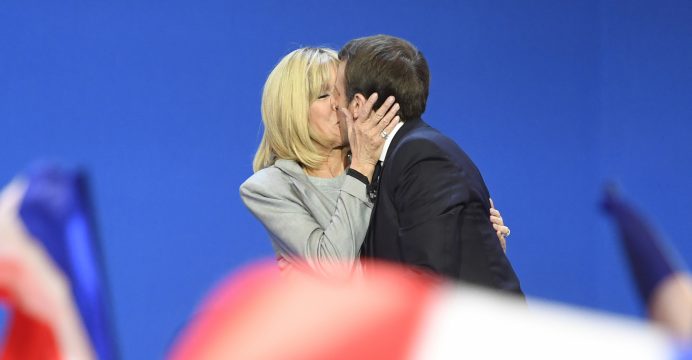 Mr Macron’s wife was his teacher, Mr Macron is now 39 and his wife is 64

Emmanuel Macron, the neoliberal candidate widely tipped to beat far-right Marine le Pen to the French presidency, first met his now-wife Brigitte when he was 15 and she his 39-year-old teacher.

And the pair weathered town gossip, the fury of Mr Macron’s parents and an enforced separation, according to a forthcoming book by French journalist Anne Fulda which casts new light on their unorthodox relationship.

After spending months collaborating on a school play when the former Rothschild Bank employee was still aged only 16, the Daily Mail reports they shared a kiss on the cheek which sparked their decades-long love affair.

Before turning 17 Mr Macron was dating his still-married teacher, against the express wishes of his parents. Mr Macron is now 39, and his 64-year-old wife was by his side as he celebrated his victory in the first round of the presidential elections last week. Brigitte was still married herself when she met the young academic star, and one of the three children she had with then-husband Andre-Louis Auziere was in Mr Macron’s class at the Lycée La Providence in Amiens. Her oldest son, Laurence, is two years older than the man who is now his step-father.

But her husband’s work in international finance often took him away from the northern French city, and the teacher then known as Mme Auziere would reportedly meet her pupil for trysts at luxurious homes belonging to her well-heeled family.

Mr Macron’s parents were troubled by the rumours flying around about their son’s infatuation with a woman twice his age, and according to Ms Fulda’s exposé they staged a meeting at which Mme Auziere was reduced to tears but refused to back off.

When that intervention and attempts at match-making with a family friend failed to cool the affair, the neurologist and paediatrician decided to dispatch their son to Lycée Henri-IV in Paris, which was both one of the top secondary education institutions in France and a respectable 90 miles (145km) from Amiens.

But Mr Macron continued to make clandestine trips back to his hometown to visit the older woman, and in 2006 Brigitte underwent an acrimonious divorce with her husband. She married Mr Macron 18 months later, at which time she was 54 and he 29.

The unusual relationship has not attracted an excessive amount of attention in France, where sexual impropriety is often seen as a fact of political life. This is despite the fact that the age of consent between teachers and pupils is 18, as opposed to 15 among members of the general public.