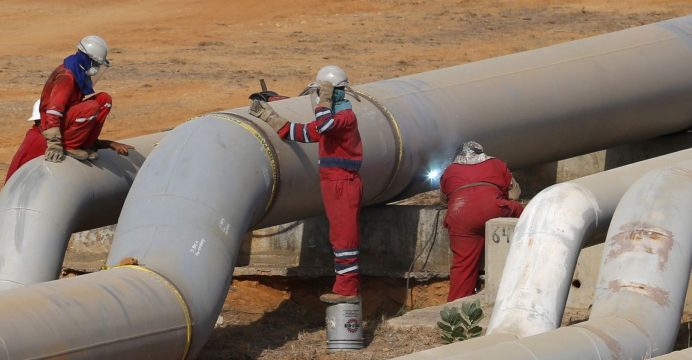 In the scorching heat of the Caribbean Sea, workers in scuba suits scrub crude oil by hand from the hull of the Caspian Galaxy, a tanker so filthy it can’t set sail in international waters.

The vessel is among many that are constantly contaminated at two major export terminals where they load crude from Venezuela’s state-run oil company, PDVSA. The water here has an oily sheen from leaks in the rusty pipelines under the surface., reports Reuters.

That means the tankers have to be cleaned before traveling to many foreign ports, which won’t admit crude-stained ships for fear of environmental damage to their harbors, port facilities or other vessels.

The laborious hand-cleaning operation is one of many causes of chronic delays for dozens of tankers that deliver Venezuela’s principle export to customers worldwide, according to three executives of the state-run firm, eight employees of maritime firms that contract with PDVSA and Thomson Reuters vessel-tracking data. Other reasons include delayed repairs and impoundments by service providers that are owed money by cash-strapped PDVSA.

Neither PDVSA nor Venezuela’s Oil Ministry responded to requests for comment about the firm’s maritime operations.

The tankers sidelined for cleaning provide a vivid example of the firm’s downward spiral: Lacking the cash to properly maintain ships, refineries and production operations – or to pay business partners on time – PDVSA can’t boost exports, which is its only option for raising more cash.

The lagging exports crimp the flow of cash back to the country’s crippled socialist economy, as citizens struggle daily amid soaring inflation and shortages of food and medicine. Because Venezuela relies on oil for more than 90 percent of export revenues, the problems of its state-run oil company pose a national crisis.

Venezuela’s crude exports declined 8 percent to 1.69 million barrels per day (bpd) in the first quarter versus the same period in 2016, according to Thomson Reuters data.

Although embattled Venezuelan President Nicolas Maduro insists the government has maintained social programs, he has publicly acknowledged that lower oil prices have left the government with less money to finance them.

Venezuela’s Information Ministry did not respond to a request for comment about the nation’s social spending.