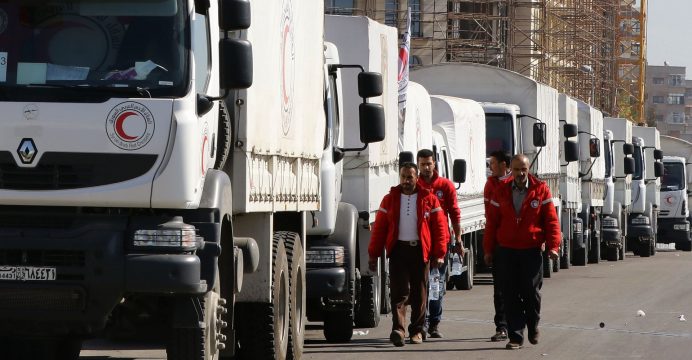 Buses evacuated thousands of people from two rebel-besieged Shi’ite villages in northwest Syria on Friday and hundreds of rebels left a town near Damascus with their families, under a deal between the government and insurgents.

A monitoring group said government forces later entered Madaya, the town where rebels had been holed up for nearly two years, taking back control of yet more territory around the capital Damascus as Syria’s conflict enters its seventh year, reports Reuters.

Similar agreements have been reached in recent months, with rebels leaving areas long besieged by President Bashar al-Assad’s forces, sometimes in exchange for Shi’ite Muslim residents moving from the villages surrounded by the mostly Sunni insurgents.

Damascus holds the upper hand against rebels in the west of the country, and has negotiated the deals from a position of strength thanks to Russia’s intervention in support of Assad since 2015, as well as backing from Iran and Lebanese Hezbollah.

The opposition says the deals amount to forced demographic change and deliberate displacement of Assad’s enemies away from the main cities of western Syria.

The government says the deals allow it to take back control and to restore services in the wrecked towns.

Early on Friday, residents of the mostly Shi’ite villages of al-Foua and Kefraya, besieged by rebel forces in the insurgents’ northwestern Idlib province stronghold, left on dozens of buses, the British-based Syrian Observatory for Human Rights monitoring group said.