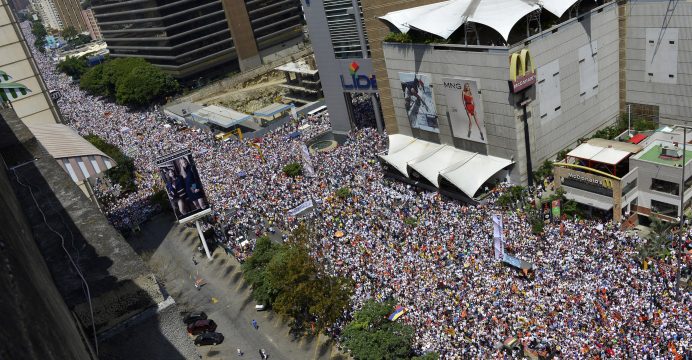 Protesters clashed with security forces during protests in Venezuela on Saturday after a ban on a top opposition leader from office breathed life into a fractured movement and fueled the first sustained anti-government demonstrations since 2014.

Saturday’s protests extended a week of unrest sparked by last week’s Supreme Court decision in which it assumed the role of the opposition-led congress. The action was quickly overturned, but the global outcry it sparked galvanized the opposition.

Security forces blocked the march in Caracas, as they did during two other protests this week, prompting violent confrontations.

Protesters lobbed rocks and petrol bombs and burned trash in the street while authorities responded with a volley of tear gas.

“The government is afraid. If it were not afraid, it would not close the streets. … It would not disqualify Capriles,” said 27-year-old lawyer Gikeissy Diaz, adding that half of her graduating class has left the country and that she is thinking of doing so, too.

Capriles, a two-time presidential candidate and current Miranda state governor, who was seen by many as the opposition’s best chance in the presidential election scheduled for 2018, on Friday was banned from holding political office for 15 years.

The order from the national comptroller’s office cited “administrative irregularities” including breaking contracting laws and improper management of donations, according to a copy of the ban.

The ban triggered condemnation from other Latin American countries and the United States, which said it was “deeply troubled by the persecution” of Venezuela’s opposition.

“We also reject the rationales the Maduro government proffers for its repressive actions, which, when closely examined are spurious and, politically-motivated, and without basis in domestic or international law,” a U.S. State Department spokesperson said on Saturday.