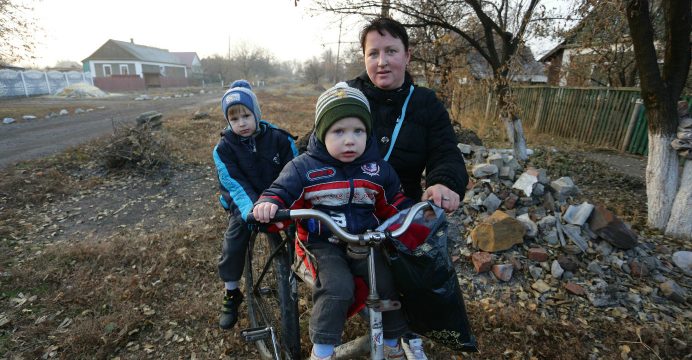 More than 200,000 children – or 1 in 4 – in the two regions most severely affected by the ongoing conflict in eastern Ukraine require urgent and sustained psychosocial support to address the trauma of living through more than three years of violence.

The 200,000 children in critical need of support live in Donetsk and Luhansk oblasts, within 15 kilometers of each side of the ‘contact-line’ that divides the government and non-government-controlled areas and where fighting is most intense.

“The world has forgotten about this invisible crisis in eastern Ukraine, but hundreds of thousands of children are paying a heavy price, one that could last a lifetime without adequate support. We urgently need funds to reach these traumatized children,” said UNICEF Ukraine Representative Giovanna Barberis. 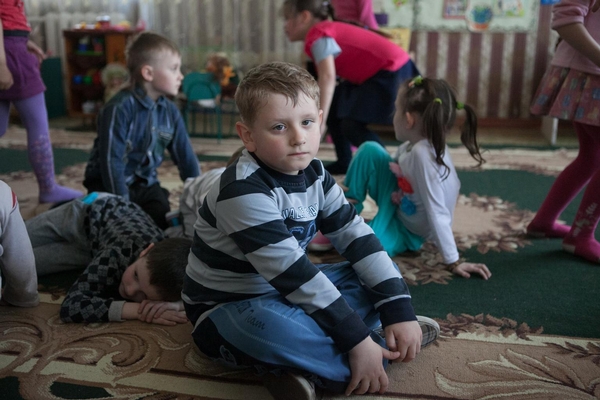 Children sit and lie on the floor while other children walk nearby, in the only operating kindergarten in the city of Debaltseve, Donetsk Oblast * PHOTO CREDIT – UNICEF

Children nearest the ‘contact-line’ have been living in chronic fear and uncertainty due to sporadic shelling, unpredictable fighting, and dangers from landmines and other unexploded ordinance. Many risks their safety to get an education.

Seven schools were damaged during the most recent escalation of violence in February and March 2017, and more than 740 schools – 1 in 5 in eastern Ukraine – have been damaged or destroyed since the conflict began in 2014.

The majority of the 200,000 children in need of sustained psychosocial support in eastern Ukraine are not receiving adequate care. Services are stretched and underfunded. Dedicated social workers, psychologists, and specially trained teachers are working around the clock. However, as the conflict drags on, additional investments are required to meet these children’s needs.

UNICEF is appealing for US$31.2 million to support children and families affected by the conflict in eastern Ukraine. This includes US $5.5 million for child protection services and psychosocial support. So far UNICEF has received less than a third of its funding requirements and child protection is critically underfunded.

“Children should not have to live with the emotional scars from a conflict they had no part in creating. Additional support is needed now so that young people in Donetsk and Luhansk can grow into healthy adults and rebuild their communities,” said Barberis. “Children and their families urgently need peace. We call on all sides of the conflict to recommit to the ceasefire signed in Minsk to end this senseless violence.”

“Children and their families urgently need peace. We call on all sides of the conflict to recommit to the ceasefire signed in Minsk to end this senseless violence.”