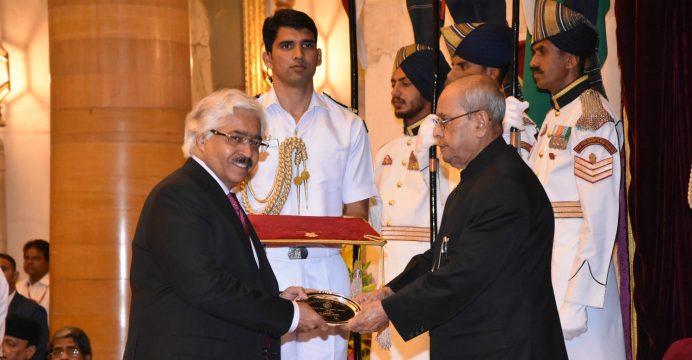 Graduated in Medicine (MBBS) from the Jawaharlal Nehru Medical College, Aligarh Muslim University in 1978. Later, moving to the UK for higher education, he served as a cardiologist at the Queen Elizabeth Hospital of Birmingham University till 1988.

Dr. Ashok Seth (8th in the first row) along with President of India and others

During his career span, he has pioneered numerous angioplasty techniques Directional Atherectomy, Angioscopy, Stents, Thrombectomy devices and Drug Eluting Stents, use of Impella heart support device failing heart, Bioabsorbable Stents, and TAVI and implemented it successfully both in India and other regions in Asia Pacific. He has performed one of the highest numbers of angiographies and angioplasties which have been mentioned in the ‘LIMCA Book of Records’.

He has been honored by Doctorate from four prestigious Universities in India. He has more than 250 publications to his credit in prestigious Indian and International medical journals, written and edited chapters in 10 textbooks of Cardiology and Medicine & edited two books in Cardiology. He has trained more than 350 cardiologists from India and abroad in advance techniques of angioplasty.