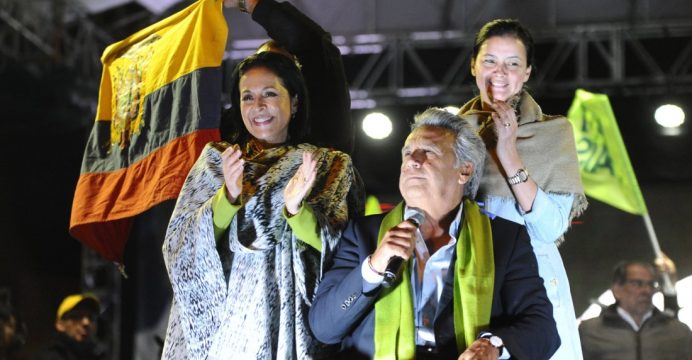 A row has erupted over Ecuador’s presidential elections after early results indicate a victory for the incumbent party’s candidate.

With more than 98% of the votes counted, Lenin Moreno of the Socialist Party had won 51.15% and his challenger Guillermo Lasso 48.85% of the votes.

Mr Lasso has demanded a recount, arguing electoral fraud was used to grant victory to his rival.

He has also called on his supporters to take to the streets in protest.

Three exit polls had earlier predicted a win for Mr Lasso, a conservative former banker, prompting celebrations by him and his supporters.

At 17:00 local time (22:00 GMT) Mr Lasso, waving an Ecuadorean flag, took to the stage in a hotel in his hometown of Guayaquil to tell his backers that “a new Ecuador” had been born.

He tweeted a picture of the celebrations with the words: “Democracy has won, FREEDOM has won in Ecuador.”

He tweeted that “we’re not stupid, nor are the Ecuadorean people” and called on them to “peacefully defend their votes”.

Hundreds of Mr Lasso’s supporters gathered in front of the electoral commission offices shouting “No to fraud!”.

Meanwhile, supporters of Mr Moreno also took to the streets, but to celebrate.

In the capital Quito, angry protests and jubilant celebrations were going on just kilometres apart.