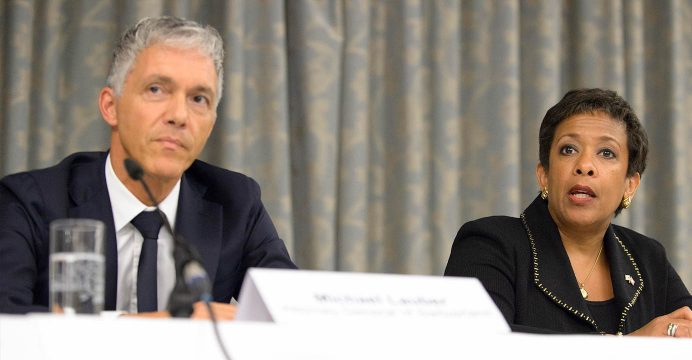 FIFA has completed a 22-month internal inquiry into allegations of high-level corruption and criminal misconduct that buffeted world football and handed its report to Swiss authorities, soccer’s ruling body said on Friday.

“FIFA will now return its focus to the game, for fans and players throughout the world,” said FIFA President Gianni Infantino, elected last year to replace Sepp Blatter, who is under criminal investigation in Switzerland.

In a statement, FIFA said that more than 2.5 million documents were reviewed during the investigation and that the report it shared with Swiss authorities ran to 1,300 pages and included more than 20,000 pages of “exhibits”, or documentation.

The investigation began after several dozen soccer officials, mainly from Latin America, were indicted in the United States in 2015 on corruption-related charges, sparking the worst crisis in FIFA’s 113-year history.

Some of the suspects have pleaded guilty and await sentencing, others face trial and some are in their native countries where they are fighting, or have avoided, extradition.

FIFA said its report would also be made available to U.S. investigators.

In Switzerland, the attorney general’s office has begun criminal proceedings against Blatter and former FIFA secretary general Jerome Valcke on suspicion of offences including criminal mismanagement

“FIFA is committed to conducting a thorough and comprehensive investigation of the facts so we could hold wrongdoers within football accountable and cooperate with the authorities,” Infantino said in the FIFA statement.

Swiss prosecutors “will continue to pursue those who enriched themselves and abused their positions of trust in football”, he added.

The statement from Zurich-based FIFA gave no further details and said that, because of the criminal inquiries under way, it was “legally restricted from releasing or commenting on the findings from its internal investigation”.

The Swiss Attorney General’s office confirmed in a statement that it had received the report and said it “appreciates the preliminary exchange of information and FIFA’s close and consistent cooperation”.

Blatter has been banned for six years and Valcke for 10 by FIFA’s own ethics committee. Both have denied wrongdoing and Valcke has appealed to the Court of Arbitration for Sport (CAS). Blatter has already lost an appeal at CAS.

for possible violations including bribery and corruption.

FIFA said then that the allegations were in the context of salaries and bonuses paid to the three.