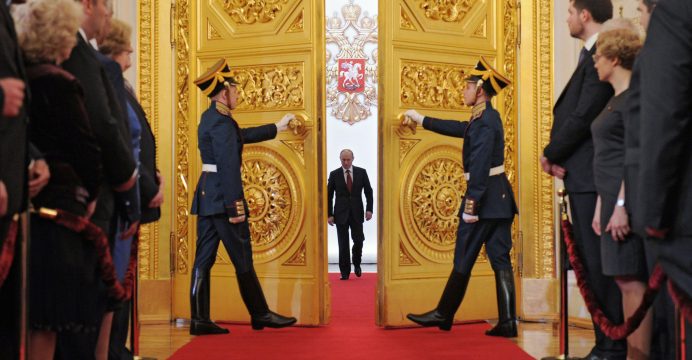 The Kremlin accused Ukraine on Thursday of damaging the prestige of the Eurovision song contest, which Kiev is hosting this year, with its decision to bar the Russian participant from entering the country.

Ukraine’s state security service said on Wednesday Yulia Samoylova, a 27-year-old Russian singer, had violated Ukrainian law by visiting Crimea, which Russia annexed in 2014, and would not be allowed to enter Ukraine for three years, reports Reuters.

The row is a combustible mix of simmering antipathy between Moscow and Kiev over Russia’s military intervention in Ukraine, and high passions surrounding Eurovision, an annual singing pageant taken especially seriously in eastern Europe.

“Without doubt the Ukrainian decision to a serious extent debases the forthcoming contest, it’s probably a blow to the prestige of Eurovision,” Kremlin spokesman Dmitry Peskov told a regular conference call with reporters.

“The decision from our point of view is completely unfair, it’s ill-considered, and we nonetheless hope that it will be reviewed,” he said.

Ukraine received the right to host the 2017 contest when its entry, singer Jamala, won last year’s competition. Moscow alleged Jamala’s song, about a Kremlin purge of an ethnic minority from Crimea in the 1940s, was a veiled attack on Russia and broke contest rules banning political messages.

Ukraine expects about 12,000-14,000 spectators to attend the competition in May with millions more watching on television. It will be the second time that Kiev hosts the event.

The European Broadcasting Union, which operates Eurovision, said it was deeply disappointed by Kiev’s decision, but that it had to respect the laws of the host nation.

The EBU said it had offered the possibility of the Russian singer participating from outside Ukraine via satellite link. The proposal was made to Russia’s Channel One.

Ukraine considers it illegal for any non-Ukrainian to enter Crimea without first obtaining permission from Kiev.

Russian state media and show-business figures reacted with fury to the entry ban on Samoylova.