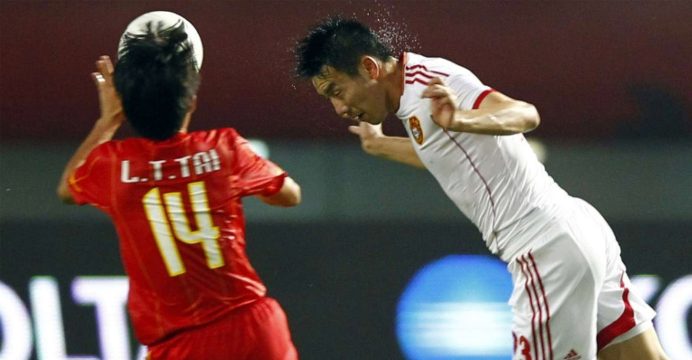 Shanghai Shenhua will withhold the salary of China international Qin Sheng for the rest of the season after condemning the midfielder’s “abominable behaviour” in stamping on Belgium’s Axel Witsel at the weekend.

Qin received a straight red card for stamping on the foot of Tianjian Quanjian’s Witsel as they jockeyed for position in front of Quanjian’s goal while waiting for a corner to be taken in Saturday’s bad-tempered encounter.

Qin faces a three-game Super League ban for receiving his marching orders, but the club have come down even harder, slapping Qin with a 300,000 yuan ($43,380) fine — a huge sum for many Chinese footballers who do not command the inflated salaries of their foreign teammates.

They have also dropped him to play with the reserve squad and withheld his salary for the rest of the year, according to a team announcement Monday.

Qin may end up getting his wages if he atones with good behaviour, the statement said, adding that in the meantime he would be provided only with a basic living allowance.

“This abominable behaviour, which is a personal, serious violation of regulations and sports ethics, has had a huge negative impact on the club and even Chinese football as a whole,” the club statement said.

Qin has issued an apology. “In the previous game, I displayed severely irrational behaviour, causing an injury to an opponent, affecting the team’s result and creating a negative impression,” he said on his official account on China’s Twitter-like Weibo in Sunday. He called his actions “vulgar.”

The Chinese international vowed to make amends and said he accepted all punishments handed down by the club.

AFP was not able to confirm Qin’s salary, and thus how much the blunder could end up costing him. Chinese media reports estimate his wages at around five million yuan ($723,000) per year. His new star teammate Carlos Tevez is reported to earn a similar amount per week at Shenhua, according to media in his native Argentina, making him the world’s highest salaried player.

Many Weibo users leapt to Qin’s defence, saying a fine was in order but that withholding his entire salary was excessive.

“I think the punishment is a bit heavy. If a foreign player committed this kind of malicious foul how would the club deal with that? I feel domestic players are vulnerable,” said one user.

Down to 10 men, Shenhua still managed to take a 74th minute lead through Gio Moreno but it was Witsel who popped up with the equaliser 10 minutes later after escaping a red card himself moments earlier when he was only booked for an elbow on Shenhua’s Fredy Guarin.

The match ended 1-1 after Quanjian’s Brazilian import Alexandre Pato blazed an 88th-minute penalty over the bar.