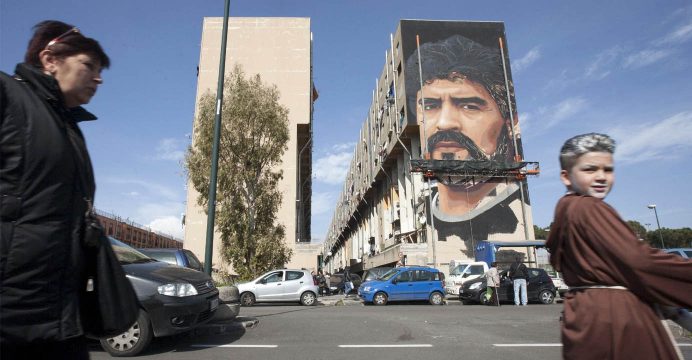 Diego Maradona fans have another reason to make a pilgrimage to Naples: a new mural of the Argentine legend has gone up to mark 30 years since he led local club Napoli to its first Italian title.

Painted by artist Jorit Agoch, the giant, head-and-shoulders depiction of a middle-aged Maradona with grey-flecked hair and beard adorns the side of a building in San Giovanni Teduccio, a tough neighbourhood known locally as “The Bronx”.

Maradona was already the subject of a famous mural in the city’s Spanish Quarter, which portrays him dribbling with ball at his feet in a manner reminiscent of when he was in his prime.

That one was restored last year and there are discussions underway about making Maradona an honorary citizen of Naples to mark the May anniversary of the clinching of the 1987 title – a groundbreaking triumph that was repeated, again under Maradona’s leadership, in 1990.

Passing in front of the new mural on Tuesday, hours before Napoli’s Champions League clash with Real Madrid, retired sailor Giuseppe said Maradona was still revered “like a saint” in the city – despite voicing reservations about the star’s run-ins with the Italian tax authorities.

“In my opinion he was the the greatest player of all time – better even than Pele,” he told AFPTV.

“The one thing that’s sure is that when he was here, Napoli won a lot, although I don’t agree him not paying his taxes when I have to pay them on my pension.”

Maradona recently visited the city for the first time in four years and he gave the team a pep-talk before their 3-1 first leg defeat by Real in the Champions League last-16 tie.