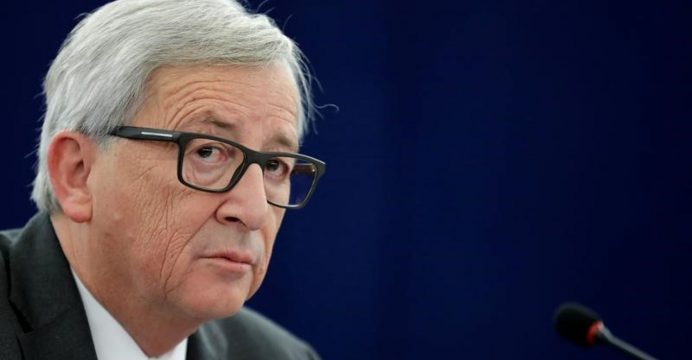 European Union chief executive Jean-Claude Juncker on Wednesday presented options for reforming the bloc to shore up its unity and popular support after Britain’s shock decision to withdraw.

Five scenarios in a “white paper” that the president of the European Commission delivered to the European Parliament ranged from changing little to scaling back to just policing a common market to a major leap forward in pooling states’ sovereignty, reports Reuters.

Juncker dismissed a much reduced role for the EU, saying the Union should have greater ambitions to build on 60 years of promoting peace and prosperity. Leaders of the 27 states other than Britain will discuss the White Paper when they celebrate the bloc’s 60th anniversary at Rome on March 25.

Juncker has spoken positively in recent days of one scenario under which some states would integrate further faster — a possibility some governments, especially in the poorer east, fear could entrench divisions to their disadvantage.

But overall he rejected criticism from some EU lawmakers that the executive was failing in its leadership role in the Union by not spelling out one single set of recommendations.

“I do not operate by executive orders,” Juncker said in a clear dig at U.S. President Donald Trump and his controversial policy directives in recent weeks. “I am not a dictator.”

But this would not mean the end of a “political Commission”, he told reporters, reiterating support for his presidency’s motto that implies a more assertive EU executive but that critics say overstep Brussels’ powers.

More broadly, the former Luxembourg premier said, it was national governments and parliaments which should work on the decisions to reform the EU which, as seen in Britain’s Brexit vote, faces mounting challenges from nationalist eurosceptics.

“The future of Europe should not be hostage to elections, party politics or cries of triumph directed at domestic audiences,” he said, repeating a familiar complaint that national leaders have tried to conceal their own responsibility for unpopular policies and failures behind “Brussels bashing”.

Noting the tiny resources of the EU’s central budget and a need to show voters the Union was doing more to create jobs, Juncker mentioned cooperation in the euro currency zone, security, military affairs and social standards as areas where European states could work together more but gave little detail.

Many agree that the euro zone needs deeper economic integration but that goal is hampered by differences on how to achieve it, notably between leading powers Germany and France which both hold national elections this year.

Their foreign ministers, Sigmar Gabriel and Jean-Marc Ayrault, welcomed the White Paper in a joint statement that highlighted threats to the Union and renewed calls in Paris and Berlin for an idea commonly known as “multi-speed Europe”.

“We have to find better ways to deal with the varying levels of ambition among member states so that Europe does a better at meeting the expectations of all European citizens,” they said.

Calling the EU their “best trump card for the future”, the ministers spoke of an ambitious EU defense cooperation. That has been hindered by British scepticism and they are keen to pursue it after Brexit, especially since Trump has voiced reservations about continued U.S. support for Europe’s defense through NATO.

Asked about Juncker’s reform proposals, UK Prime Minister Theresa May’s spokesman told reporters: “We have been very clear that we want the EU to be a success, for the 27 states to continue to thrive together. That is not only in their interests but it is in our interests as well.”

EU lawmakers broadly welcomed Juncker’s call for change, though were divided on how far that should involve more central coordination in Brussels or ensuring strong national powers.

For the UK Independence Party, jubilant victors of the referendum to take Britain out of the bloc in 2019, European Parliament member Gerard Batten accused Juncker of seeking “an EU superstate”.