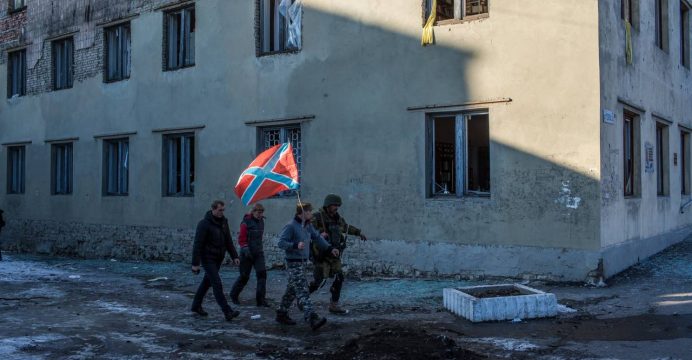 A week-long surge in violence in and around the government-held town of Avdiyivka in eastern Ukraine appeared to be winding down on Monday, as schools reopened and power and water supplies resumed following the worst clashes in months.

Last week aid agencies warned of a looming humanitarian crisis after heavy shelling between Ukrainian troops and pro-Russia separatists cut off power and water supplies to tens of thousands on both sides of the front line, reports Reuters.

A decrease in fighting around Avdiyivka on Sunday allowed emergency repairs to downed power lines and its around 20,000 residents were able to turn their lights on for the first time in a week.

On Monday, the State Emergency Service said water supplies had also been restored to the town, but not to all its surrounding villages.

“We’ve got some breathing space,” said Musa Magomedov, the head of the Avdiyivka Coking Plant, which also provides heat for the town and had to severely limit supplies due to the lack of power.

In a post on Facebook, he said there was not yet enough electricity to run the plant at full capacity, which could be a problem if winter temperatures fall far below freezing again.

The head of the Ukraine-controlled Donetsk regional administration, Pavlo Zhebrivsky, said all schools had reopened in Avdiyivka and over 500 children had turned up to study.

“Things appear to be going back to normal. Thankfully the shelling stopped. We hope for peace,” teacher Natalia Dudnik told Reuters at the town’s school No. 7.

Last week the flare-up in hostilities and desperate situation for civilians brought global attention back to the conflict, which has seen periodic surges in violence despite a peace agreement signed in February 2015.

The Organization for Security and Cooperation in Europe, which monitors the implementation of the ceasefire, welcomed the repair work to Avdiyivka’s power lines as well as those to a water filtration plant in separatist-held territory, which had also been damaged in the most recent fighting.

“Water is running again. Much more to be done. Guns need to remain silent now,” the OSCE’s special monitoring mission said in a post on Twitter.