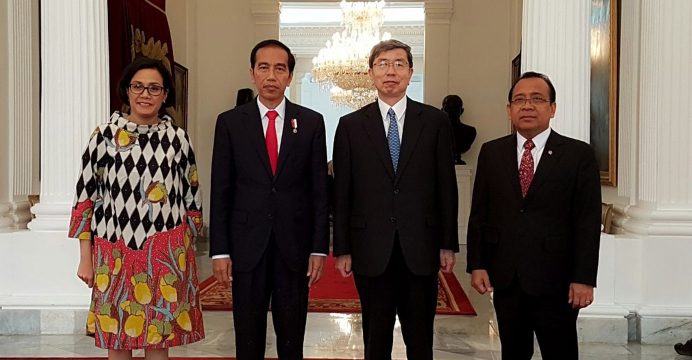 Asian Development Bank (ADB) President Takehiko Nakao met with the President of Indonesia, Joko Widodo, and expressed his confidence in the country’s economic prospects. He reiterated support for the government’s efforts to foster inclusive economic growth.

During discussions with President Widodo, Mr. Nakao congratulated the government on its prudent economic management in the face of global financial uncertainty. With a gradual improvement in private investment and continued robust consumption, ADB forecasts that Indonesia’s economic growth in 2017 will rise to 5.1%, from 5.0% last year. Inflation, which moderated to 3.5% last year, is expected to edge up to about 4% this year.

“I am highly impressed by the government’s strong commitment to policy reforms that have strengthened market confidence and helped ensure more Indonesians benefit from economic gains,” Mr. Nakao said.

Since September 2015, Indonesia has unveiled 14 policy packages comprising wide-ranging policy reforms aimed at increasing investments, strengthening competitiveness, and diversifying the economy. He noted the tangible results from the reform packages, including improvements in Indonesia’s position in the ease of doing business ranking. By the end of 2016, more than 500 companies had taken advantage of revisions to the negative investment list, with investments of $12.9 billion planned. Regulations regarding the setting of the minimum wage have helped improve the predictability for businesses.

ADB’s 2016–2019 Country Partnership Strategy with Indonesia focuses on improving infrastructure services, strengthening economic governance, and enhancing education and skills. In his meetings, Mr. Nakao reiterated ADB’s commitment to extending about $2 billion in government lending annually to Indonesia in the medium term. In addition, ADB’s private sector operations will provide investments in areas such as clean and renewable energy, agribusiness, hospitals, and pharmaceuticals.

Mr. Nakao said boosting public and private investment in infrastructure is critical to broadening the economic base and creating good jobs. ADB’s support in the energy sector will extend the reach and efficiency of the national electricity grid and help develop clean energy sources, such as natural gas and geothermal. Investment in irrigation will help improve rural productivity and incomes. In the urban sector, ADB will support delivery of citywide sanitation programs. ADB will also support private investment in infrastructure, including through strengthening the policy, institutional framework, and preparation of public-private partnerships (PPP) projects.

Using a programmatic approach, ADB will support sequenced reforms over the medium to long term. In the area of public expenditure management, the focus will be on improving quality of spending, including better targeting of pro-poor expenditures. ADB will also deepen support in the areas of financial sector development, financial inclusion, and investment climate improvement.

On education, Mr. Nakao commended Indonesia’s success in increasing access at all levels. Among the remaining challenges in education are the need to improve the quality and relevance of education programs to employer needs. During his visit, Mr. Nakao is scheduled to visit ADB-supported polytechnics in electronics and shipbuilding, and inaugurate Centers of Technology for five polytechnics. He will also visit an urban sanitation project in Surabaya, East Java.

Since joining ADB as a founding member in 1966, Indonesia has received $31.8 billion in sovereign and nonsovereign loans, and $3.2 billion in technical assistance and grants. ADB support has focused on natural resource management, education, energy, finance, transport, as well as water supply and other municipal services. Last year, ADB provided $1.75 billion in loans (including $17 million grants) to Indonesia, of which $1.27 billion were to the government. ADB’s private sector operations in 2016 amounting to $475 million comprised of loans and equity investments in geothermal and gas projects in support of lower-carbon fuel options for Indonesia.

ADB, based in Manila, is dedicated to reducing poverty in Asia and the Pacific through inclusive economic growth, environmentally sustainable growth, and regional integration. Established in 1966, ADB is celebrating 50 years of development partnership in the region. It is owned by 67 members—48 from the region.