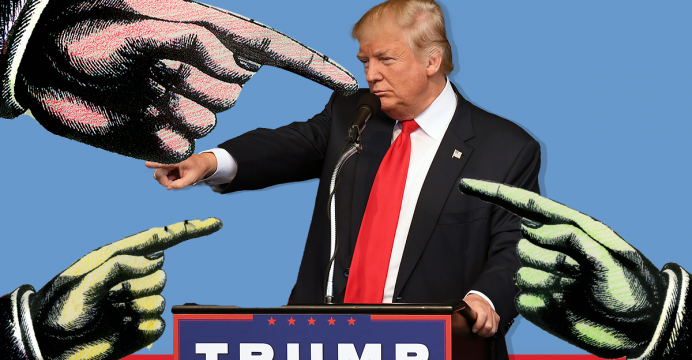 The United Arab Emirates’ foreign minister has said that US President Donald Trump’s travel ban on citizens of seven mainly Muslim countries, which has triggered global outrage, is not Islamophobic and does not target any one religion.

Trump’s order affecting nationals from Iran, Iraq, Libya, Somalia, Sudan, Syria and Yemen has sparked protests across the United States and beyond. Four US states have filed legal cases against the travel ban for alleged religious discrimination.

But Abdullah bin Zayed al-Nahyan, foreign minister of the UAE – a Muslim country – defended the ban on Wednesday, reports Reuters.

He said that most Muslims and Muslim countries were not included in the ban.

The affected countries, he added, faced “challenges” that they needed to address.

“The United States has taken a decision that is within the American sovereign decision,” he said at a joint news conference with his Russian counterpart Sergey Lavrov in the capital Abu Dhabi.

Trump on Friday signed the executive order that will curb immigration and the entry of citizens from seven Muslim-majority countries, saying it was a necessary measure to improve national security.

He separately said he wanted the US to give priority to Syrian Christians fleeing the conflict there.

The travel ban has disrupted many people’s lives by dividing families and left travellers stranded. Dozens were detained at airports, including green card holders.

Gulf Arab countries have been largely absent from the condemnation of the ban. Saudi Arabia, Kuwait, the UAE, Qatar and Bahrain have traditionally been close US allies, and all were left off the travel ban.

Of the five countries, the only one to express mild disapproval in public was Qatar, whose foreign minister was quoted during a visit to Serbia as saying he hoped Washington would reassess the ban.

“When it comes to be addressed in a Muslim framework, I think this is something we will stand against,” Sheikh Mohammed bin Abdulrahman bin Jassim Al Thani said.

Some Gulf officials even backed it openly. Dhahi Khalfan, a senior Dubai police official, tweeted on Monday “complete support” for Trump’s ban. “Every country has the right to protect its security … Trump, what you’re doing is right.”

Meanwhile, European leaders, the United Nations and international groups have condemned Trump’s measures, as passport holders from Arab countries affected by the ban were blocked from passing through customs at US airports and others were prevented from boarding US-bound planes.

The United Nations refugee agency and the International Organization for Migration called on the Trump administration to continue offering asylum to people fleeing war and persecution, saying its resettlement programme was vital.

“The needs of refugees and migrants worldwide have never been greater and the US resettlement programme is one of the most important in the world,” the two Geneva-based agencies said in a joint statement on Saturday.

The US states of Massachusetts, New York, Virginia and Washington have filed legal cases, contending that the order violates the US Constitution’s guarantees of religious freedom.